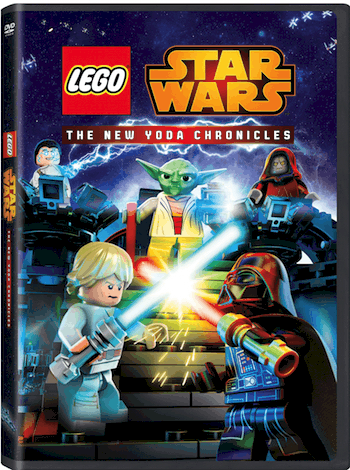 Your favorite Star Wars heroes are back in Lego® Star Wars: The New Yoda Chronicles on DVD September 15th! Unleash the lighter side of the Force with this action packed release that comes with four complete episodes, plus a bonus alternate ending.

Unleash the lighter side of the Force and share all of the action packed thrills of these interlocking, intergalactic adventures in LEGO® STAR WARS: The New Yoda Chronicles!

After headstrong Luke nearly delivers the good guys into Palpatine’s clutches, Master Yoda and the ghost of Obi-Wan Kenobi unearth the Holocrons – last remnants of the secrets of the Jedi – to further Luke’s training. But Darth Vader also seeks the Holocrons, and he’ll stop at nothing to get to them first! Meanwhile, courageous superclone Jek-14, a Force-sensitive clone, comes out of retirement to help bolster the Rebels.  Share all the action-packed thrills of these interlocking, intergalactic adventures in LEGO® STAR WARS: The New Yoda Chronicles!

Race For The Holocrons

Clash of the Skywalkers

Bonus Features:             Alternate Ending: Clash of the Skywalkers – In this alternate version, will Luke win against the Sith Lord or will Vader be victorious?

For over 90 years, The Walt Disney Studios has been the foundation on which The Walt Disney Company was built. Today, the Studio brings quality movies, music and stage plays to consumers throughout the world. Feature films are released under the following banners: Disney, including Walt Disney Animation Studios and Pixar Animation Studios; Disneynature; Marvel Studios; Lucasfilm; and Touchstone Pictures, the banner under which live-action films from DreamWorks Studios are distributed. The Disney Music Group encompasses the Walt Disney Records and Hollywood Records labels, as well as Disney Music Publishing. The Disney Theatrical Group produces and licenses live events, including Disney on Broadway, Disney On Ice and Disney Live!

Lucasfilm Ltd., a wholly owned subsidiary of The Walt Disney Company, is a global leader in film, television and digital entertainment production. In addition to its motion-picture and television production, the company's activities include visual effects and audio post-production, cutting-edge digital animation, interactive entertainment software, and the management of the global merchandising activities for its entertainment properties including the legendary STAR WARS and INDIANA JONESfranchises. Lucasfilm Ltd. is headquartered in northern California.

About the LEGO Group

The LEGO Group is a privately held, family-owned company with headquarters in Billund, Denmark, and main offices in Enfield, USA, London, UK., Shanghai, China, and Singapore. Founded in 1932 by Ole Kirk Kristiansen, and based on the iconic LEGO® brick, it is one of the world's leading manufacturers of play materials.

Guided by the company spirit: “Only the best is good enough”, the company is committed to the development of children and aims to inspire and develop the builders of tomorrow through creative play and learning. LEGO products are sold worldwide and can be virtually explored at www.LEGO.com.

For more news from the LEGO Group, information about our financial performance and responsibility engagement, please visithttp://www.LEGO.com/aboutus.

What an awesome new Lego Star Ward DVD that I will have to get and have my niece and nephew watch when they come over. It looks like a lot of fun and we love Star Wars at our house!