I Have Come to Realize 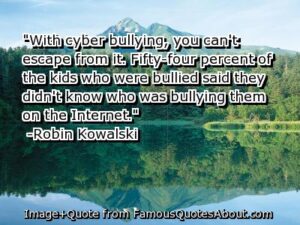 Do you remember when you were a kid, before computers? When you would go to school, or the playground, and there was always that 1 kid or more that felt they had to make you feel bad or someone else? To make them feel better? Looking back we could say “why were kids so mean?”

I remember being in 6th grade-and although the details are kinda foggy…I remember referring to one of girls in 8th grade as “Piggy” but honest it was her nickname. So anyways..one of my “friends” told her that I called her a name. So all of the sudden this girl was following me home each day walking half a block behind me calling me the “B” word among other things and I was scared I have to admit.  This must have happened a few days in a row; so I told my Dad. Well that Friday during school I heard there was a fight after school. What I didn’t realize was I was one of the people in the fight and “R” we will call her was after me. Long story short she got me off school property and slapped me so hard I fell to the ground and I could hear my Dad telling her to get off of me….and he ended up going to the police and she was left off with a warning.

Looking back, as scary as it was, when I got home it was over. There was no computer that had kids talking about it or talking about me or picking on me. I was safe in my home from all of it. But kids today aren’t. They have their cell phones, computers, iPods, texting, Facebook, and it goes on and on. Don’t get me wrong-not every kid is being bullied and most of the kids ‘on-line’ relationships are nothing to worry about. But I feel it is important to be aware of what can be going on and to know the rules in your state.

The definition of Cyber Bullying is: “Cyberbullying is the repeated use of information technology, including e-mail, instant messaging, blogs, chat rooms, pagers, cell phones, and gaming systems, to deliberately harass, threaten or intimidate others. Unlike physical bullying, where the victim can walk away, technology now allows for continuous harassment, from any distance, in a variety of ways.”-(1)

I found this important information on a website which will be noted below. These are the most popular forms of cyber-bullying.

Cyberbullying is accomplished in many ways, including*:

So I hope I have enlightened you to be aware; especially if you have tweens or teens to know your state’s rules regarding Cyber Bullying.  My hope is that you don’t ever have to go through this with your child but IF you do, maybe you will be a little more prepared.
0 Shares
Tweet
Share
Pin
Share
Share

I Have Come to Realize