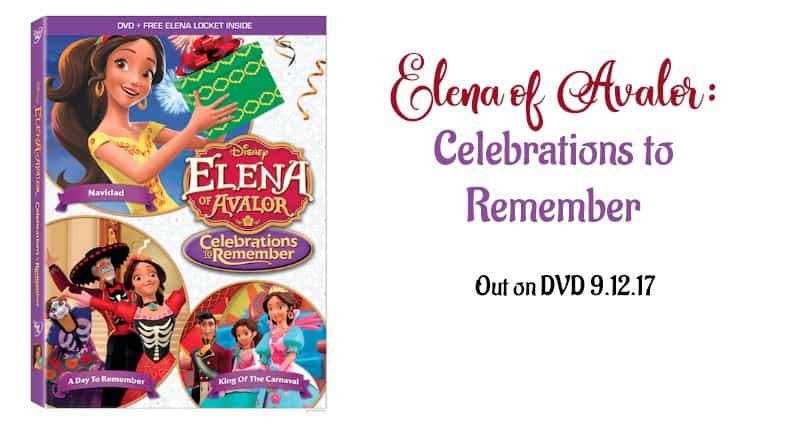 I received a copy of Elena of Avalor Celebrations to remember in exchange for this post. All opinions are 100% my own. Purchasing products through the affiliate links on this page contributes to the success of this site at no additional cost to you. Click here to find out more or read my disclosure policy.

Elena of Avalor Celebrations To Remember

Elena is back with all-new adventures coming to DVD with the release of Elena of Avalor: Celebrations to Remember!  Join Elena and her friends and family as they celebrate holidays that honor the past, cherish the present and look forward towards a magical future! In these new adventures Avalor celebrates Navidad, Dia de los Muertos and Carnaval! There’s something special to look forward to with each holiday! Celebrating holidays is a very important part of our life with our kids and now grandkids so I enjoyed this even more!   Kids love Elena and friends and of course will love celebrating these special holidays year around.

This DVD is packed with laughs, new characters to cherish, and heart. Elena of Avalor: Celebrations to Remember is a must-own for the entire family! Includes Four Celebration Themed Episodes, Plus Two Bonus Episodes and a FREE Exclusive Elena Locket!

Join Elena, Her Family and Friends as they Honor the Past, Rejoice in the Present and Greet the Future with Music, Laughter and Love!

Join Crown Princess Elena, along with her family and friends, as they honor the past, rejoice in the present and greet the future with music, laughter and love. Whether celebrating Navidad, Dia de los Muertos or Carnaval, new and older traditions alike play a part. And even though everyone doesn’t always agree on the best way to get the party started, one thing is perfectly clear: holidays aren’t about what you do; they’re about the special people you spend them with! Elena Of Avalor: Celebrations To Remember

King of the Carnaval