Where did the years go? Today I realized that while my 15 year old daughter carved her pumpkin that we hadn’t carved pumpkins since we moved here 3 years ago. We used to always get each of the kids a pumpkin; it was at one time a big deal. We used to decorate for Halloween; now the only decorations we have are the ones the spiders leave and I don’t catch in time.  I see adults that are really into Halloween. My Aunt LOVES Halloween; and I see that others really enjoy it .It just hasn’t been ‘my kind-of-thing’ since I became an adult. 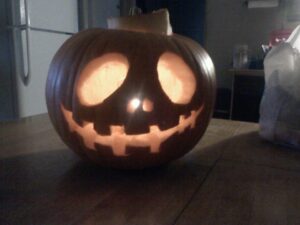 When I was a kid I really enjoyed Halloween, but as I became an adult; more a parent; I found I dreaded it. Either we couldn’t afford the right costumes or we couldn’t figure out something fun that the kids could be. Each year it has gotten easier-as they have gotten older and I felt at a certain age, they were too old to go out trick-or-treating as really it is for the younger kids. But looking back I don’t really know why I was so anti-Halloween… I mean my parents always took us out house-to-house, always either made us or got us costumes, and my Dad was always a part of the pumpkin carving. So as silly as it sounds I will make sure we have pumpkins until Abbey graduates and even after, (maybe even some day when we have Grandchildren). 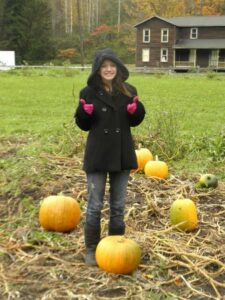 But one thing that I will also continue with the continuation of pumpkin carving is FINALLY making delicious Pumpkin Seeds thanks to a great blogger with tons of ideas. You can click here for the Best Ever Pumpkin Seeds Recipe.

Pumpkins’ Night Out on the Town