2 Broke Girls is not only funny but fun loving! If you can use a little laughter or a lot of laughter then 2 Broke Girls is the show for you.  Max and Caroline are two girls down on their luck but have a vision of owning their own Cupcake business. Caroline is the one that came up with the idea of building the business with Max’s delicious cupcakes. Although Caroline and Max are both loveable and fun-loving, Caroline is the one that seems to focus on having hope, building a dream.

It is obvious why ‘2 Broke Girls’ is up for New TV Comedy for the People’s Choice Awards.  Not only is the show usually full of laughs, it has a feel-good vibe.  I also like how at the end of each episode it ‘chings’ how much money they have raised in that episode.

Do you have a dream of opening your own business? Or is your dream for a different path? Have you ever realized what your dream was, worked on it and achieved it? If so I would love for you to comment below and share with my readers.

Also I would love for you to stop by the People’s Choice Awards of 2012 and cast your vote for your favorite shows. While you are there please vote for ‘2 Broke Girls’ for 2012’s New TV Comedy. 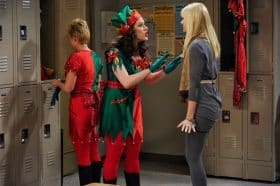 “I have been hired by Warner Bros. WBWord division to promote WBTV shows nominated in the People’s Choice Awards.”