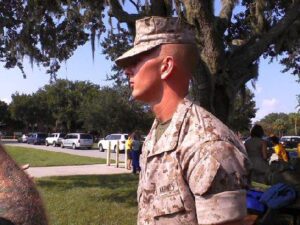 Let me first fill you in on what originally went on…. Our son Aaron is currently stationed in Hawaii in the USMC. He has been to the “big island of Hawaii” for training (he is actually stationed in Oahu). Which he went to for I think it was a month, then got back to where he was stationed to be sent to California for more training for deployment in Afghanistan in I think May. So while in CA he called me from a friends phone to tell me that his leave was April 15-April 29, he must have called me Sunday the 27 of February or there about as it took a few days to find a flight that didn’t have 12 hours worth of layovers and that he would return back in time to report back in. Finally I decided with all of the gas prices going up I better secure his flight, so I did that on Saturday the 5th of March. I spent another 2 hours finding a good flight that he could afford. With Taxes & Fees his original flight was $1090.38-and you have to be fast as the airline prices go up in a matter of a refresh button time…lol

Now moving up to this past Sunday March 20th Aaron called late at night to tell me for sure his leave dates had been changed to March 31 at 16:30-April 10 23:59 …(March 31 4:30pm-April 10 11:59pm). So Monday morning I got up bright and early and was on the phone with the place I originally booked the tickets. I found round trip flights for $1151 and change…but they were through Delta. The guy told me I was looking at approximately $1000 to change flights as Aaron couldn’t fly Delta since we had originally book US Airways. So not having that kind of money that day I decided to call US Airways directly-to which I was told with proper documentation they would waive the $150 change fee but Aaron would be responsible for the difference. Now those same flights for $1151 were going up to $1600…so I did some research and kept watching the flights…to find US Airways went down to $1200 I think this was Wednesday…so again I called (and by the way nothing against anyone with an accent but I had a very hard time understanding them) I explained my son would be deploying to Afghanistan earlier than planned so the USMC had to change the dates-it didn’t matter. I even tried explaining that this was my son, he was just 20 this month-and I really wanted to see him before he left but financially I couldn’t see why we had to pay the difference since he was serving our country etc etc. By now I think between finding flights and talking to people on the phone I had spent well over 7 hours…By Thursday I was in tears as no matter who I spoke to they didn’t/couldn’t help me without it being $1000 or more…

My husband contacted our local news (WETM) http://www.wetmtv.com who incidentally we have an interview with tomorrow (Saturday March 26 at 1pm) to tell our story. My husband also contacted Fox News, the chaplain at Aaron’s post, his recruiter(s), the Red Cross (which I wasn’t expecting anything from them as this wasn’t a medical situation), and we made posts on Facebook. We appreciate all the outpouring of friends on this situation.

SO …today Friday March 25th…I started again decent this morning and called the travel agency-who told me it was going to be over $1000…and to call US Airways…so I did. I got a supervisor named Erin…lol…funny huh?…I couldn’t hear her well but explained my situation for what felt like the 100th time….and she said-well with proper military orders on military letter head we can submit it for consideration-but we will only waive the change fee. (this also had to be mailed-not emailed)…I have by now less than a week until Aaron goes on leave. So I pleaded that he was my oldest son, serving our country….and although she started to act like it mattered there was no budging on the ticket difference which was now up to over $1200…So I explained that I didn’t understand if seats were available how they couldn’t change his ticket since he was leaving for Afghanistan earlier than expected and these were military orders…not like he decided to change his vacation. Still…didn’t matter. She reiterated that fees were fees and they were not in the business of giving away flights…I said-its hardly giving away when his original ticket that was purchased less than 3 weeks ago was $1090.38. She again said rules were rules and there were no exceptions. By this time my normally calm demeanor was started to get agitated ….{really I am being mild}…SO I said…since you can’t find consideration for a soldier that is serving our country and going to Afghanistan it makes me think that US Airways doesn’t care about our military or my son. To which i was told i was OFFENSIVE Me? Offensive? I find US Airways offensive…that my son among many other’s sons & daughters that are proudly serving our country could not be given any type of consideration for a flight home to see their family before deployment at a price already paid. So then she told me to have a good day-so I said wait, wait- can you give me a supervisor to which she replied “they do not have phone numbers”…so I said do you mean to tell me they do not have phones on their desks? and she said there are no numbers and if you wish to file a complaint you can email us at http://www.usairways.com under compliments and complaints….but that will take 5-7 days…and I said well I don’t have that many days to get this fixed…and I want to speak to someone above her-to which I was told to have a good day and she hung up on me.

We had to use US Airways as they were the original ticket. They would credit his ticket with a letter on USMC letterhead to be used within one year and even then it would be given consideration. I started working on this on Monday-and today is Friday…I didn’t have 5-7 days to get a form letter response as I have seen on their facebook fan page…I needed answers now.

SO I went back to the travel agency and found out how much the difference would be with the new dates and the change fee I would have to pay and they came up with a price of $1361.00 MORE than the original $1090 ticket price….I got a hold of Aaron’s Grandparents to see if they could help me out…and then I went into our checking account an low and behold a miracle had happened…our Federal Taxes deposited a difference that we weren’t expecting and with a little other money we were able to come up with enough…so I raced to the bank-got it all in one place…and raced back home (went the speed limit of course)…and called back the travel agency-had to go over everything again….and oddly enough the flight was STILL $1361.00 different times than earlier but Aaron still gets to leave on the 31st-will arrive home late night the 1st and leave the 10th very early and be back in Honalulu in plenty of time to sign back in.

Who do I thank? I thank our Lord in heaven…I believe that because of HIM our son is able to come home. With the help of my parents and money we didn’t realize was there…and then the friendly gestures of a few friends…(that will offset the higher cost)…he will come home-which otherwise possibly wouldn’t have happened.

How To Save Money For Your Family

Are we happy with US Airways? NOPE…Are we happy with the USMC? Well our son signed up to serve our country as many people know that are involved with the military, whatever branch….things happen and itinerary’s change. We support Aaron in his duty to the USMC and are very proud of him-so we felt we had to do whatever we could to see him before he leaves to Afghanistan.

I feel something in our world has to change not just because of my son-but because these men & women give their lives to have us live in the ‘land of the free, and the home of the brave’…because of them I have the freedom to write this letter and feel safe.

Thank you for taking to time to read this…and if you would like to pass it on you can copy my link above! I really appreciate it.