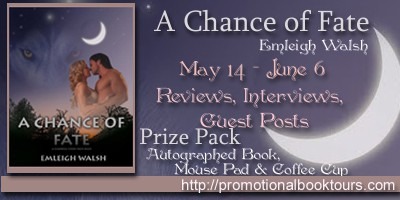 Chance McGregor is known as one of the toughest werewolves around. As the Dominion Creek Pack Guardian it’s his job to protect the pack and its laws. Even if that requires him to find his true mate or mate with someone of the council’s choosing. With the Mating Ceremony fast approaching – and Chance a very unwilling participant – he has more on his mind than pack safety. It’s enough to make even the baddest werewolf whine like a puppy.

Stephanie Taylor is finally making her way in the world. She’s out of a bad marriage, starting a business with her best friend in a great new town, and in control of her stable – if not sometimes boring – life. She can handle boring and she doesn’t need a man to tell her what’s best for her anymore.

WHAT’S A WOLF TO DO?

When Chance runs into Stephanie on the street, he realizes that he found his woman. The problem is she’s a human. Not a problem for him though. Now all he has to do is convince her that they are meant to be together forever; talk the ever-meddling pack council into allowing the mating; and protect his pack from a group of rogue wolves wreaking havoc across the state. With their hearts, and lives, on the line Chance and Stephanie will do the only thing they can…

TAKE A CHANCE ON FATE