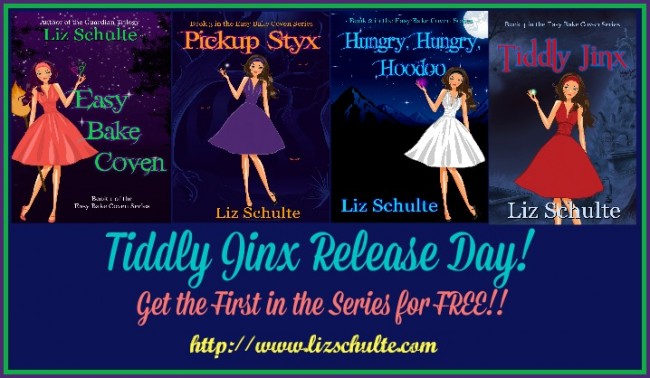 Tiddly Jinx
Selene Warren’s life is plagued by disaster. To fix the trouble her good intentions caused, she needs to rescue the necromancer who tried to help her, find and return the Pole of Charon, and win over the Elfish people. However, nothing ever goes as planned.
The necromancer reappears in the Abyss, but is determined to be an enemy rather than a friend. The Pole of Charon can’t be tracked, yet small tears between worlds pop up and let in monsters that threaten to expose what Selene brought back. Tensions between elves and the other fae could erupt into violence at any moment, tearing apart the race once and for all.
To mend the rips in the veil, Selene’s coven will have to use black magic, but that comes at a cost. Every time a spell is cast their souls are at stake. Forced to make a deal with an enemy or let the world be destroyed, all of her the lies and double crosses start to add up. The line between good and evil blurs until Selene doesn’t know which side she is fighting for.

For Selene Warren being a witch is no big deal. She dabbles in harmless magic with her friends and never thinks much about it. However, when a stranger who seems to know her shows up at her studio and her grandmother is brutally attacked, her simple life becomes complicated.
A world of elves, half-elves, fae—and one peculiar Sekhmet named Femi open up to her. She will discover that fairy tales are real, politics are ugly in any world, and there is a lot more to her life than she ever dreamed possible.
This new reality threatens swallow Selene whole, but with a forgotten past beating down her door, she will have to dive in to save her future.

Many authors claim to have known their calling from a young age. Liz Schulte, however, didn’t always want to be an author. In fact, she had no clue. Liz wanted to be a veterinarian, then she wanted to be a lawyer, then she wanted to be a criminal profiler. In a valiant effort to keep from becoming Walter Mitty, Liz put pen to paper and began writing her first novel. It was at that moment she realized this is what she was meant to do. As a scribe she could be all of those things and so much more.

When Liz isn’t writing or on social networks she is inflicting movie quotes and trivia on people, reading, traveling, and hanging out with friends and family. Liz is a Midwest girl through and through, though she would be perfectly happy never having to shovel her driveway again. She has a love for all things spooky, supernatural, and snarky. Her favorite authors range from Edgar Allen Poe to Joseph Heller to Jane Austen to Jim Butcher and everything in between.