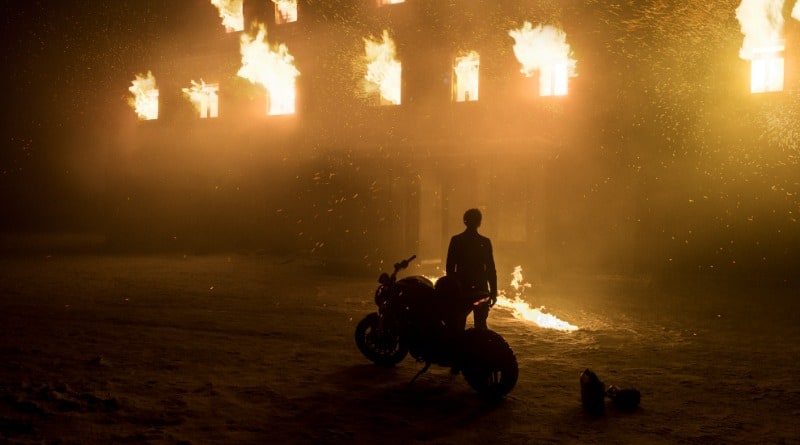 Disclosure:  I received a copy of the movie below in order to facilitate my review.  All opinions are my own.

The Girl in the Spider’s Web is a movie that will keep you wondering from start to finish.  The acting is superb and will keep you entertained until the end.

Lisbeth Salander is played by actor Claire Foy and she does a magnificent job playing her part.  Her character is tough even during adversity and she will keep you engaged throughout the movie.  If you enjoy spies, cybercriminal and corrupt government officials (like who can they trust?).  This movie is definitely for you.

Order The Girl in the Spider Web on Amazon here. (affiliate link)

“It will pump adrenaline into your nervous system.” ~ Peter Travers, Rolling Stone

The Past Never Forgets in the Intense and Heart-pounding Continuation of  The Girl with the Dragon Tattoo Series Starring Golden Globe®
and Emmy®-Winner Claire Foy as Lisbeth Salander
THE GIRL IN THE
SPIDER’S WEB
Debuting on Digital January 22, 2019 and on Blu-ray™ & DVD February 5, 2019Includes Director and Screenwriter Feature & Deleted Scenes Commentaries, Eight Deleted Scenes, and Four Behind-the-Scenes Featurettes

CULVER CITY, Calif. (December 17, 2018) – Golden Globe® and Emmy ® winner Claire Foy (Best Performance by an Actress in a Television Series – Drama, “The Crown,” 2017; Outstanding Lead Actress in a Drama Series, “The Crown,” 2018) brings to life the iconic role of Lisbeth Salander in the next exciting chapter of The Girl with the Dragon Tattoo franchise, THE GIRL IN THE SPIDER’S WEB, debuting on digital and Movies Anywhere January 22, 2019 and on Blu-ray™ Combo Pack and DVD February 5, 2019 from Sony Pictures Home Entertainment. Director Fede Álvarez (Evil Dead; Don’t Breathe) brings insurmountable suspense and tension to the film adaptation of the fourth book of the acclaimed Millennium series to create a thrilling cinematic experience. THE GIRL IN THE SPIDER’S WEB also stars Sverrir Gudnason (Borg vs. McEnroe), Lakeith Stanfield (Get Out; Sorry to Bother You, TV’s “Atlanta”), Sylvia Hoeks (Blade Runner 2049) and Stephen Merchant (Logan; Hot Fuzz).

The digital and Blu-ray releases of THE GIRL IN THE SPIDER’S WEB unravel the behind-the-scenes mysteries with feature commentary from director Fede Álvarez and screenwriter Jay Basu, eight deleted scenes with commentaries, and four featurettes — “All About the Stunts,” “Claire Foy: Becoming Lisbeth,” “Secrets of the Salander Sisters” and “Creating the World: The Making Of.”

From self-driving cars to driving a motorcycle over a river of ice, “All About the Stunts” details the most action-packed moments from the film broken down step-by-step showing the storyboards, rehearsals and more. In “Claire Foy: Becoming Lisbeth,” the award-winning actress gives an in-depth and personal account of what the character Lisbeth means to her and what she brought to her in this film. Led by Claire Foy, Sylvia Hoeks and Fede Alvarez, “Secrets of the Salander Sisters” gives an inside look into the complex and captivating relationship between Lisbeth and Camilla and how it was brought to life on the screen. Lastly, “Creating the World: The Making Of” takes a look into how the book was adapted for this film and showcases how the dark and gritty world was broken down so that the characters stayed true to the book.

Growing up in Disneyland by Ron DeFore

Synopsis:
Claire Foy (“The Crown”) stars in a new Dragon Tattoo story as Lisbeth Salander, the highly-skilled vigilante from the acclaimed Millennium book series. Salander and journalist Mikael Blomkvist find themselves caught in a web of spies, cybercriminals and corrupt government officials, as they race to rescue a dangerous program capable of global destruction held by shadowy figures linked to Lisbeth’s past.

THE GIRL IN THE SPIDER’S WEB has a run time of approximately 117 minutes and is rated R for violence, language, and some sexual content/nudity.

“Golden Globe(s)®” is the registered trademark and service mark of the Hollywood Foreign Press Association.
Emmy® is the trademark property of ATAS/NATAS.