SANTA MONICA, CA (September 26, 2017) – Based on the best-selling memoir written by Jeannette Walls, Oscar® winner Brie Larson (2015, Best Actress, Room) and Oscar® Nominee Woody Harrelson (2009, Best Supporting Actor, The Messenger) star in The Glass Castle, arriving on Digital HD October 24 and Blu-ray™ (plus Digital HD), DVD and On Demand November 7 from Lionsgate. Hailed as “one of the must-see movies of 2017” (Vanity Fair), The Glass Castle chronicles the adventures of a young girl growing up in a dysfunctional family of nonconformist nomads. From the producer of The Shack and The Blind Side, the film also stars Oscar® Nominee Naomi Watts (2012, Best Actress, The Impossible) and Golden Globe® Nominee Max Greenfield (2013, Best Supporting Actor – Television, “New Girl”).

Chronicling the adventures of an eccentric, resilient and tight-knit family, The Glass Castle is a remarkable story of unconditional love. Larson brings Jeannette Walls’s best-selling memoir to life as a young woman who, influenced by the joyfully wild nature of her deeply dysfunctional father (Harrelson), found the fiery determination to carve out a successful life on her own terms.

Directed by Destin Daniel Cretton (Short Term 12) and written for the screen by Cretton & Andrew Lanham, The Glass Castle features all-new bonus content including a behind-the-scenes featurette and deleted scenes, and will be available on Blu-ray and DVD for the suggested retail price of $39.99 and $29.95, respectively. 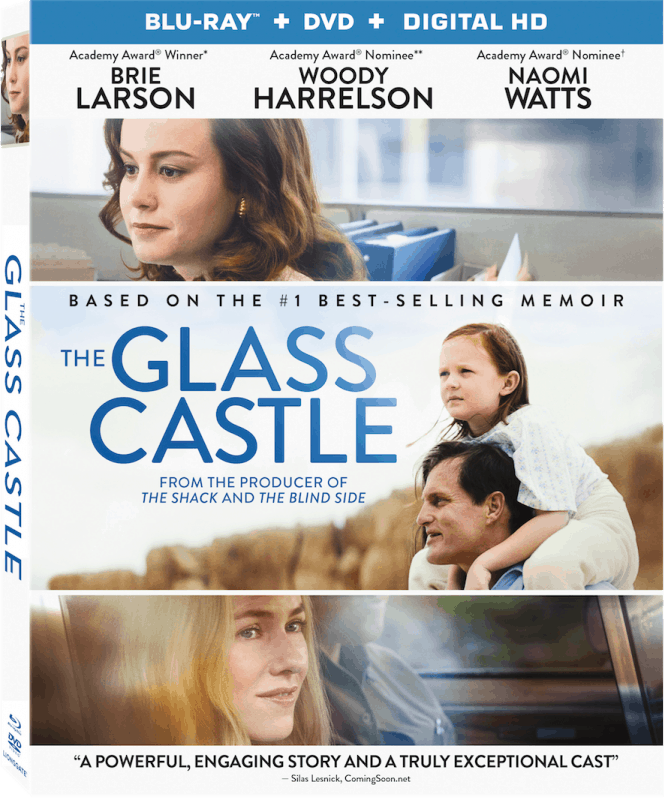 The first major new studio in decades, Lionsgate is a global content platform whose films, television series, digital products and linear and over-the-top platforms reach next generation audiences around the world.  In addition to its filmed entertainment leadership, Lionsgate content drives a growing presence in interactive and location-based entertainment, gaming, virtual reality and other new entertainment technologies.  Lionsgate’s content initiatives are backed by a 16,000-title film and television library and delivered through a global licensing infrastructure.  The Lionsgate brand is synonymous with original, daring and ground-breaking content created with special emphasis on the evolving patterns and diverse composition of the Company’s worldwide consumer base.
Facebook
Twitter
Instagram
0 Shares
Tweet
Share
Pin
Share
Share