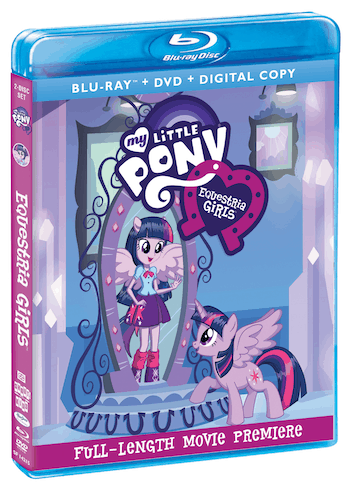 Kaijudo: Rise of the Duel Masters ­ Darkness of Heart

On September 2nd, My Little Pony: Equestria Girls will be available on rental and purchase, in high definition and standard versions, on iTunes, Amazon Instant Video, VUDU, Google Play, Playstation Network, and Xbox!!

TO BE MADE AVAILABLE ON digital entertainment platforms

Los Angeles, CA – Following the exciting release of the full-length feature film My Little Pony Equestria Girls on DVD and Blu-ray/DVD on August 6th from Shout! Factory Kids, in collaboration with Hasbro Studios, the film will now be available on a variety of digital entertainment platforms in the US and Canada. My Little Pony Equestria Girls will be available for rental and purchase, in high definition and standard versions, on iTunes, Amazon Instant, VUDU, Google Play, Rovi, Sony Playstation Network, and Xbox on September 2.

My Little Pony Equestria Girls is an exciting new dimension to the incredibly popular MY LITTLE PONY brand. When a crown is stolen from the Crystal Empire, Twilight Sparkle pursues the thief into an alternate world where she transforms into a teenage girl who must survive her biggest challenge yet…high school. With help from her new friends who remind her of Ponyville’s Applejack, Rainbow Dash, Pinkie Pie and Fluttershy, she embarks upon a quest to find the crown and change the destiny of these two parallel worlds.

The highly popular film was first introduced to fans this summer in theaters.

Through The Mirror Of Equestria Girls

My Little Pony: Friendship is Magic – A Pony For Every Season

My Little Pony: Friendship Is Magic – Adventures in the Crystal Empire

My Little Pony: Friendship Is Magic – Season One

Hasbro Studios is the Los Angeles-based entertainment division of Hasbro, Inc. (NASDAQ: HAS). The studio is responsible for entertainment brand-driven storytelling for the company across television, film, commercial productions and short-form. It develops, produces and distributes TV shows based on Hasbro’s world class brands, including TRANSFORMERS, MY LITTLE PONY, LITTLEST PET SHOP and FAMILY GAME NIGHT. Many of these shows air on Hub Network, a U.S. television network for kids and their families, that is a joint venture between Hasbro and Discovery Communications (NASDAQ: DISCA, DISCB, DISCK). Hasbro Studios shows can also be seen on networks in more than 170 countries globally.  Since its formation in 2009, the studio has received seven Daytime Emmy wins and 16 nominations.  On the film side, the studio is developing and producing a number of features based on Hasbro’s brands, including TRANSFORMERS 4 (Paramount), G.I. JOE 3 (Paramount) and CANDY LAND (Sony).  The studio team also oversees the production of commercials that feature Hasbro’s brands as well production of short-form content that can be seen on all of the major digital and social media platforms globally.

Kaijudo: Rise of the Duel Masters ­ Darkness of Heart