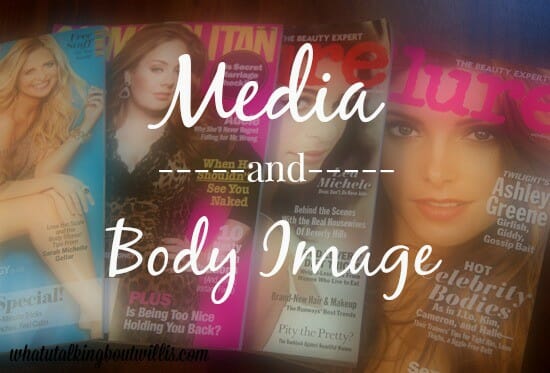 The Media and Its Effect on Body Image Part II

The Media and Its Effect on Body Image

In today’s culture, we are constantly surrounded by media, whether it is in the form of television, movies, or magazines.  No matter where we go, we can’t avoid the bombardment of beautiful people with glamorous lives that we are taught to model overselves after.  The modern world has become obsessed with thinness, which has brought on by the depiction of only the skinniest and seemingly beautiful models and actresses, those of which have also been digitally altered to project perfection.  Viewing these images and internalizing the message that no one is perfect enough can lead to dangerous tendencies for both models and the average woman.  The portrayal of dangerously thin models and the use of Photoshop to create unattainable body standards should be prohibited because it gives women a false sense of beauty and it is connected to body image issues that have harmful physical, emotional, and psychological effects on society.

Body image is defined as an individual’s experience of his/her body.  It is the “mental picture a person has of themselves as well as the individual’s associated thoughts, feelings, judgments, sensations, awareness, and behavior” (Ojeda 1).  Teens tend to gather an inaccurate conclusion about their bodies and then begin to take radical measures to fix their perceived bodily defects.  Those with poor self-body image tend to feel more dissatisfied with their bodies. In fact, the biggest wish of teen girls is to be thinner and even children as young as five are concerned with being fat.  It has also been found that young girls are “more afraid of gaining weight than of a nuclear war, cancer, or losing their parents” (Ojeda 1).  A vast majority of high school girls go on diets regularly, but only a very small percentage of them are actually overweight.  Women and girls constantly compare their bodies to models, when in reality women between the age s of 18 and 34 only have a 7% chance of being thin as the average catwalk model (Ojeda 4).

The media makes women believe the ideal body image represents health, wealth, and youthfulness.  Their bodies must be thin, tanned, and young with no excess fat.  These standards have caused women to feel at competition with one another.  What girls do not know, is that during puberty, their bodies gain an average of 25 pounds in order to prepare for the ability to conceive later on (Kowalski 4).  However, they do not believe they should be gaining this weight, and go to extremes to prevent natural body development.  It is no wonder that women feel this way, though.  25 years ago, an average fashion model was only about 8% thinner than the average woman, but now that has risen to 23% (Kiesby 5).  Health and fitness magazines clutter the shelves in the grocery stores with headlines that read, “Foods that erase belly fat!” and “Professional trainers’ tips to get bikini-ready!”, and advertisements for appetite suppressants and diet supplements.  These messages constantly tell women their body is never good enough for America’s standards.  To add on to those advertisement, movie stars and fashion models have become the epitome of beauty for today’s youth.  More and more girls try to live up to these standards the media has set forth, and instead of inspiring teens to view and accept all types of healthy bodies, images on the television and in movies encourage women and girls to become thin by any means necessary and “women are more at war with their bodies than ever before” (Graydon 2).  If those advertisements were not enough, the constant promotion of solutions to fix our “imperfections” play into the idea our bodies in fact need fixing.  Women have become exposed to the easily accessible remedies, such as liposuction, stomach stapling, anti-cellulite creams, breast, butt, cheek and chin implants, Botox and collagen injections, chemical peels, and facelifts (Graydon 2).  It is clear that the expectations of women’s bodies are becoming increasingly unrealistic.

Along with these beauty “resolutions”, Photoshop plays a major role in the rise of unrealistic body standards in today’s media.  Several viral videos of the process of editing a woman’s face and body through Photoshop reveal the absurd ways in which women are being altered. The eyes are enlarged, legs are lengthened, stomachs are toned and flattened. It is impossible to promote a healthy body image when it is seen as acceptable to digitally alter one’s body to an impracticable measure.  To address the problem, the American Medical Association (AMA) suggests a warning label to be placed on every digitally transformed image presented in advertisements, such as “Retouched photograph aimed at changing a person’s physical appearance” (qtd. in Diller 2-3).  Another resolution to the issue at hand would be simple: show more natural and healthy photographs of teens, young women, and even older women.  Some celebrites have publically taken standards against magazines digitally altering their bodies. Kate Winslet protested against GQ Magazine for making her unnaturally thin in her cover photo and Brad Pitt requested his photograph on W Magazine’s cover be untouched by Photoshop. In numerous studies, it has been proven exposure to images that were Photoshopped can contribute to unrealistic body image expectations, emotional  problems, and even eating disorders (qtd. in Diller 1).

To Read Part II :  The Media and Its Effect on Body Image Part II

How to Get the Yard You’re Happy With

Part III:  The Media and Its Effect on Body Image Part III

Part IV:  The Media and Its Effect on Body Image Part IV

The Media and Its Effect on Body Image Part II