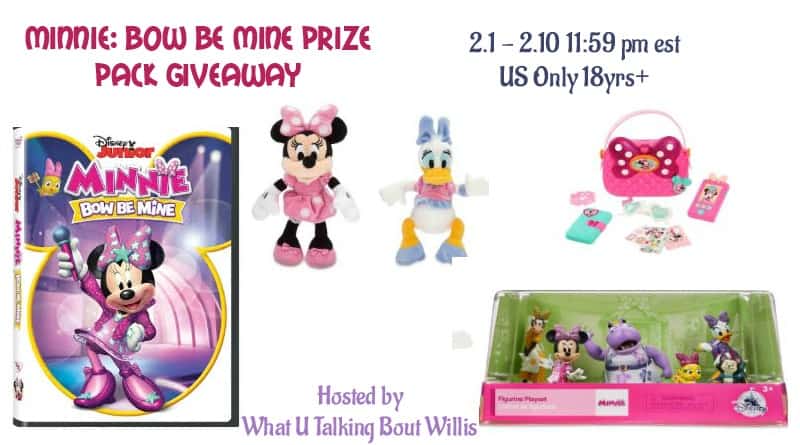 I Have an Idea for an App, Now What? Your Guide to Custom App Development

Welcome to the Minnie: Bow Be Mine Prize Pack Giveaway!

Included in this giveaway are:

The Happy Helpers Shine a Spotlight on Adventure!

MINNIE: BOW BE MINE

As the Happy Helpers from Mickey and the Roadster Racers, BFFs Minnie and Daisy take center stage as they tackle super-tough tasks and help friends who need a hand: judging a surfing contest in Hawaii, solving a doozy of a mystery, photographing a rare rainforest bird and much more! Then, watch Minnie rock out onstage at Hot Dog Hills Stadium! Featuring two bonus music videos, Bow Be Mine amps up the fun to a whole new level of awesome.

A Doozy Night of Mystery

Now for the Giveaway which you can enter on below. & Good Luck!

Disclosure:
We reserve the right to make revisions, to cancel, or suspend this contest for any reason. We are not associated with any of the companies named above. The odds of winning are based on the number of entries received. This is Open to the US Only and you must be 18 years or older to enter. Confirmed Winner(s) (by Random.org) will be contacted by email. Winner(s) have 24 hours to respond before a new winner is chosen. No purchase necessary. Void where prohibited by law. The sponsor(s) will be responsible for product shipment to winner(s) of this giveaway. What U Talking Bout Willis?(and any other blog participating) is not responsible for product shipment/delivery. This event is in no way administered, sponsored, or endorsed by, or associated with, Facebook and/or Twitter, Google, Pinterest. This disclosure is done in accordance with the Federal Trade Commission 10 CFR, Part 255 Guides Concerning the Use of Endorsements. Entrants must only enter with either one email address, IP address and/or Facebook account, anyone found violating these rules will be disqualified.

I Have an Idea for an App, Now What? Your Guide to Custom App Development