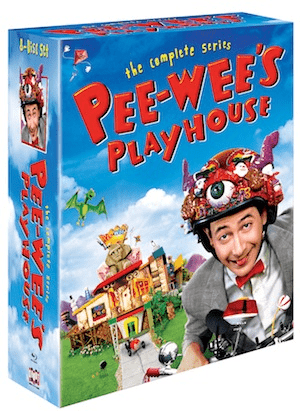 Also, if you order from the link below you can get FREE standard U.S. Shipping 2 weeks early:

All Remastered in Spectacular High-Definition!

Experience Pee-wee’s Playhouse like never before! All 45 wacky episodes, plus thePee-wee’s Playhouse Christmas Special, have been meticulously remastered from the original film elements — and now you can see this ground-breaking series for the first time in beautiful high-definition!

Winner of an amazing 22 Emmy® Awards, Pee-wee’s Playhouse is a cultural touchstone for a generation, and its visually dynamic design and offbeat sense of humor were a genuine phenomenon.  Whether reliving childhood memories or introducing this beloved series to a new generation, the newly re-mastered Pee-wee’s Playhouse will take you back to being a kid.  This is an essential Blu-ray collection for loyal fans and collectors.

TV Guide named Pee-wee’s Playhouse #10 on their list of THE TOP 25 CULT TELEVISION SHOWS EVER!  For over 25 years, the enormously popular Pee-wee Herman and innovative television series Pee-wee’s Playhouse, created by, and starring Paul Reubens, has captured a special place in the hearts of millions of viewers, young and old.  Since its initial premiere on CBS in 1986, this highly acclaimed children’s program became Saturday morning appointment viewing for kids in the ‘80s and ‘90s and has been a staple in the pop culture zeitgeist ever since.