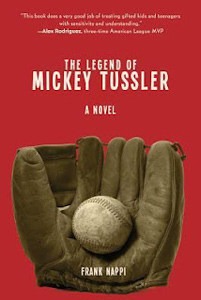 The Legend of Mickey Tussler

In the late 1940s, the minor-league Milwaukee Brewers are foundering yet again and manager Arthur Murphy is desperate. When he sees seventeen-year-old Mickey Tussler throwing apples into a barrel, he knows he has found the next pitching phenom. But not everyone is so hopeful. Mickey’s autism—a disorder still not truly understood even today—has alienated the boy from the world, and he is berated by other players and fans. Mickey faces immense trials in the harsh and competitive world of baseball while coping with the challenges inherent to his disorder. An honest and knowledgeable book about overcoming adversity, and the basis for the television movie A Mile in His Shoes, Mickey’s powerful story shows that with support and determination anyone can be triumphant, even when the odds are stacked against him. It’s 1949 and eighteen-year-old pitching phenom Mickey Tussler is back with the rejuvenated minor league Brewers in the sequel to The Legend of Mickey Tussler (the basis for the television movie A Mile in His Shoes). Despite Mickey’s proclamation that he will never play baseball again after last season’s violent conclusion, his manager—and now a surrogate father—Arthur Murphy cajoles the emotionally fragile, socially awkward boy with autism into giving it another shot. Mickey reluctantly returns to the field and must once again cope with the violence and hatred around him. When a young African American player joins the team, the entire team is subjected to racial threats and episodes of violence, one of which Mickey witnesses firsthand. Struggling to understand such ugliness and hatred, and fearful of reprisal should he tell anyone about what he has seen, the boy’s performance on the field suffers. Mickey now must deal with a side of human nature he scarcely comprehends. Frank Nappi has taught high school English and Creative Writing for over twenty years. His debut novel, Echoes From The Infantry, received national attention, including MWSA’s silver medal for outstanding fiction. His follow-up novel, The Legend of Mickey Tussler, garnered rave reviews as well, including a movie adaptation of the touching story “A Mile in His Shoes” starring Dean Cain and Luke Schroder. Frank continues to produce quality work, including Sophomore Campaign, the intriguing sequel to the much-heralded original story and the just-released thriller, NOBODY HAS TO KNOW, which received an endorsement from #1 New York Times bestselling author Nelson DeMille. Frank is presently at work on the third installment of his Mickey Tussler series and his next thriller. He lives on Long Island with his wife Julia and their two sons, Nicholas and Anthony.

Santa Fake coming to DVD/Digital on 12.3