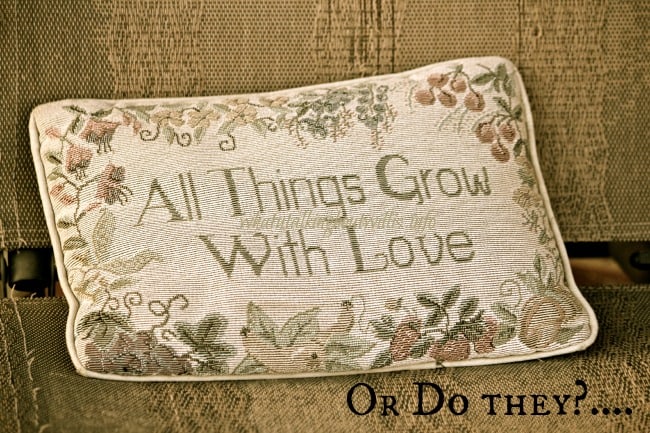 All Things Grow with Love Or Do They?……..

When I was in second or third grade, I recall standing in the cafeteria line waiting to get my lunch. I remember as if it were yesterday. I was standing in front of another little girl that was in my grade. Her name was MaryBeth, her skin was dark and her hair cutely braided on top of her head. She was a little chunky and wore a blue, white checked jumper type outfit. She was usually quiet and kept to herself, but when she smiled, she lit up the room, and her giggle was just infectious.

As we stood in line, I could hear two boys behind her saying things like, “What smells?” and “I bet it is her,” and “‘They’ smell like that.” I looked back at her, and our eyes met. I felt so bad for her. I said, “MaryBeth, why don’t you stand in front of me?” She gave me a slight smile and nodded, thanking me. You could tell by her sunken shoulders that she felt badly.

Right around that time, I was asked to help a new little girl whose name was Ning Nong. She didn’t speak English very well and was very shy. The school wanted me to help her during lunch and befriend her to make her feel at ease. I remember she was small, shy, and unsure of her surroundings. Every day — and I mean every single day — she would spill her lemonade when she opened her thermos. I would clean it up for her; finally, after a few spills and clean-ups, I started offering to open it for her. Every day she would also bring a chocolate pudding cup. Back then, pudding cups were in small metal containers with a pull-back tab, which I also helped her open. Kids picked on her, mainly because she was different, and it didn’t help that she struggled with her lunch. But if I had struggled with my lunch; would I have been made fun of, and laughed at? Possibly.

Back then, in the mid-‘70s, I was naive. I was naive to think that things would get better, that change would happen as our world got smarter or as our hearts became more open and loving. I was naive to think that when I got older our world would become more accepting of the differences we each possess. I was a little girl that had hoped that one day everyone would be treated as equals when it came to color, shape, backgrounds, and opinions. I was hopeful because no longer were people treated as a piece of property but as human beings. Even then I was naive, as I wasn’t aware of what went on outside of my small world.

I am almost 45 now. I see hate and negativity that has become more pervasive than it was when I was a young child, perhaps it’s because I now see the world through an adult lens, without the innocence and childlike hope and optimism.  The people swathed in the security blanket provided by their privilege(s) choose instead to invent things to be offended about and cry injustice. They are blind to any true injustice suffered by those who do not carry the same badges of privilege.

When I was a child I was taught to treat others as you would like to be treated, to use your manners and realize when you make choices, you accept the consequences of your actions. If you didn’t have anything nice to say; then it was better to say nothing at all. Did I always abide by those words? Not always. I was a kid, and I did my best. I was, however, taught right from wrong and was still shown love when I made the wrong choices.

I remember this song from my childhood and I really wish people could live by its simple lyrics to make the world a better place.