Protect the Past. Save the Future.

CULVER CITY, Calif. (July 20, 2017) – An unlikely trio travel through time in order to protect history as we know it in TIMELESS: SEASON ONE, debuting on DVD September 19 from Sony Pictures Home Entertainment. NBC’s thrilling action-adventure sends a history professor (Abigail Spencer), a soldier (Matt Lanter) and a scientist (Malcolm Barrett), chasing a dangerous fugitive (Goran Višnji?) with plans to re-write American history after he steals a secret experimental time machine. Running with the likes of Bonnie and Clyde, Ian Fleming and Al Capone, the team must make every effort not to affect the past themselves as they jump through time in this unique historical fiction/sci-fi series. The TIMELESS: SEASON ONE DVD set includes four discs with all 16 episodes, along with seven deleted scenes and a gag reel.

Synopsis:
This thrilling action-adventure series centers around a mysterious criminal who steals a secret state-of-the-art time machine, intent on destroying America as we know it by changing the past. Our only hope is an unexpected team: a scientist, a soldier and a history professor who use the machine’s prototype to travel back in time to critical events. While they must make every effort not to affect the past themselves, they must also stay one step ahead of this dangerous fugitive. Can this handpicked team uncover the mystery behind it all and end his destruction before it’s too late? 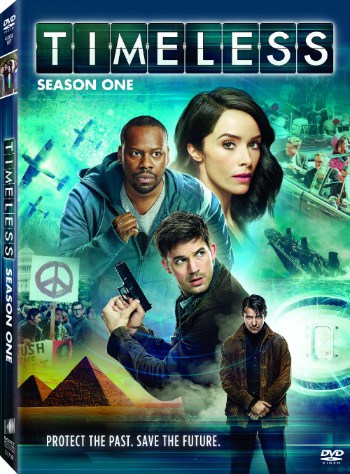 The Best Futuristic Games You Should Play