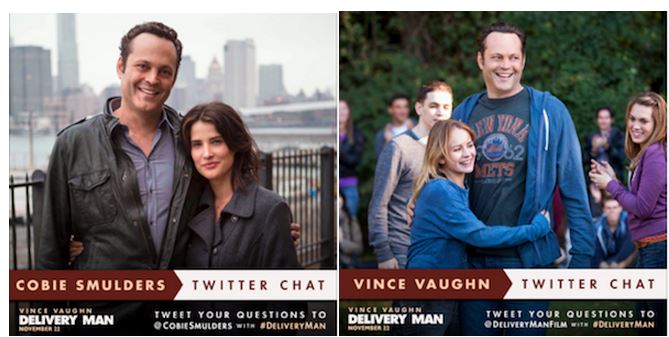 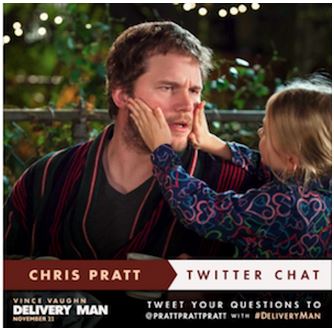 FANS SUBMIT A QUESTION FOR A CHANCE TO WIN.

Today, the cast of Delivery Man is taking over Twitter to answer your questions for Delivery Night!

Tweet your movie questions to @DeliveryManFilm for Vince Vaughn, @prattprattpratt for Chris Pratt,  @CobieSmulders for Cobie Smulders, with  #DeliveryMan.  Task Rabbit is also surprising select participants in the @DeliveryManFilm Twitter Chat with a Delivery Man gift box. Tweet your questions and join the convo now!

For a chance to instantly win a Delivery Man gift box tag @TaskRabbit in your tweet to @DeliveryManFilm with the hashtag #DeliveryMan.

DreamWorks Pictures’ “Delivery Man” stars Vince Vaughn as affable underachiever David Wozniak, whose anonymous donations to a fertility clinic 20 years earlier resulted in 533 children. David must now embark on a journey that leads him to discover not only his true self but also the father that he could become.

A DreamWorks Pictures and Reliance Entertainment presentation, the film is written for the screen and directed by Ken Scott, based on “Starbuck,” the original screenplay written by Ken Scott and Martin Petit, and also stars Chris Pratt and Cobie Smulders. “Delivery Man” is produced by André Rouleau and executive produced by Ray Angelic, Scott Mednick and Mark Sourian.

Happy Holidays from DreamWorks Spirit of Christmas on Netflix

TaskRabbit provides people and businesses with an easy, trusted and safe way to get both everyday and skilled tasks done. A two-way marketplace, TaskRabbit connects people who need an extra hand with a network of pre-approved and background-checked individuals who have the time and skills needed to complete the job. Based in San Francisco, TaskRabbit is backed by notable investors, including Baseline Ventures, First Round Capital, FLOODGATE Fund, Founders Fund, Collaborative Fund, Shasta Ventures, LightSpeed, Michael Eisner and Allen & Company. For more information, visit http://www.TaskRabbit.com or follow TaskRabbit on Twitter and Facebook.