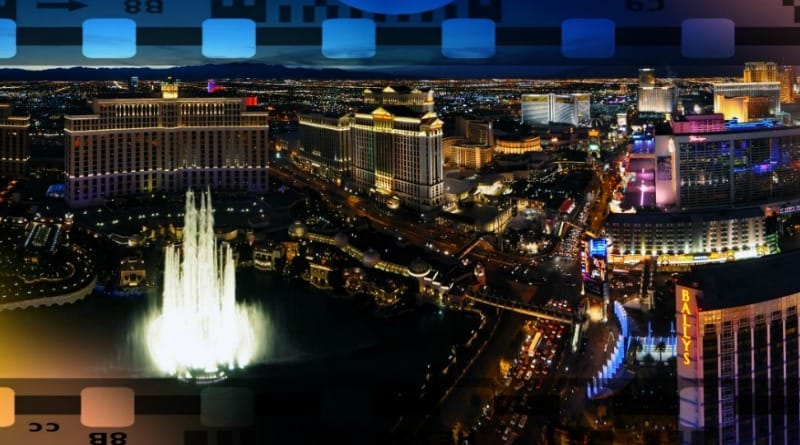 Las Vegas has been home to some of the most iconic movies in Hollywood’s history. A larger than life town situated in the middle of a desert, Las Vegas earned the reputation as the world’s capital of excess, hedonism, and sin ever since the 1940s, and has been immortalized as such by hundreds of films on the big screen.

From the epic mob saga The Godfather (1972) to the crazy shenanigans of The Hangover (2009); the classy heist flick Rat Pack’s Ocean’s Eleven (1960) to the George Clooney led reboot (2001); the fatalistic Leaving Las Vegas (1995) to the psychedelic excesses of Fear and Loathing in Las Vegas (1998), Vegas has been the perfect location to tell hundreds of stories about excess, temptation, and perdition.

While many of the locations of classic Vegas movies no longer exist – such as the Riviera Hotel and Casino, where movies like Austin Powers: International Man of Mystery, the original Ocean’s 11, and Casino were shot – there are still plenty of amazing real-life movie locations to visit if you are planning to visit Sin City.

As you would expect, plenty of these filming locations feature the famous Las Vegas casinos themselves, allowing you to try your luck in casino games in the same locations as your favorite characters on the silver screen – a very fun and tempting proposal! Just make sure to get some practice online before you hit the tables so you don’t get cleaned out!

Circus Circus is definitely a must see for any fans of Hollywood movies, having served as a location for some of the most emblematic films set in Vegas. Thanks to its extravagant architecture and decoration, this Hotel and Casino’s surreal circus environment has been featured in dozens of movies and TV shows throughout the decades.

In his seminal novel Fear and Loathing in Las Vegas, Hunter S. Thompson wrote, “The Circus-Circus is what the whole hep world would be doing Saturday night if the Nazis had won the war. This is the sixth Reich. The ground floor is full of gambling tables, like all the other casinos . . . but the place is about four stories high, in the style of a circus tent, and all manner of strange County-Fair/Polish Carnival madness is going on up in this space.”

While unfortunately the movie adaptation of his book was refused permission to use their name or film in their property, prompting the filmmakers to set part of the film in the fictional “Bazooko Circus”, any visitors to Circus Circus will immediately recognize the familiar setting.

Circus Circus has also appeared in other films such as Diamonds are Forever, Baby Geniuses, and Austin Powers: International Man of Mystery.

While this off-the-strip hotel is often overlooked in favor of some of its most flashy counterparts in the Vegas strip, the Westgate Las Vegas Resort & Casino is definitely a stop you won’t want to miss if you are a true film buff.

While the Westgate has housed several films throughout its storied history – of which much of it was spent at the International Hotel, the Las Vegas Hilton, or the LVH – it is perhaps best known for its appearance as the “Whyte House” in the James Bond classic Diamonds are Forever. In this movie, Bond must stop a nefarious plot that involves a diamond heist, supervillain clones and ultimately, a giant laser satellite powered by diamonds. While much of the action takes place all over Vegas, the Westgate is central to the plot and even sees Bond scaling its walls to get to the top floor.

The Westgate has also been the setting of other big Hollywood productions, such as Indecent Proposal and Over the Top, as well as being the setting for the fantastic Elvis Presley concert documentary Elvis – That’s The Way It Is.

One of the most emblematic, longstanding hotels on the strip, the Tropicana has been featured in some of Hollywood’s most iconic films of all time.

While James Bond may have been climbing the Westgate to face off clone Blofeld, it was in the Tropicana that he spent his nights. Relaxing in the bathtub while drinking a famed Vodka Martini and, of course, inviting a certain vixen of the name of Plenty O’Toole (who unfortunately is thrown out the window before Bond can complete his seduction), Bond seems to have a pretty good time at the famed hotel.

However, believe it or not, Bond is not the most iconic guest to have stayed in this hotel, as the Tropicana also doubled as the Tropigala in the Godfather movies – with the name being changed to avoid copyright issues. Owned by Michael Corleone himself, the Tropigala is one of the crown jewels of the Corleone family as they expand their operations in Vegas. While some of the scenes shot in the Tropicana for Part II were cut, they have since been restored for The Godfather Epic.

One of the most iconic hotels on the strip, the Roman-themed Caesars Palace has been a staple of Hollywood movies ever since its inauguration in 1966.

The only non-hotel or casino on this list, The Neon Museum – formerly known as the Neon Boneyard – is a 2 acre collection of retired Las Vegas signs dating all the way from the 1930’s to present day. Some of the most famous signs in their collection include the Stardust, Caesars Palace, Moulin Rouge, O’Shea’s, Lady Luck, Binion’s Horseshoe, New-New York  and the Golden Nugget.

Not only are many of these signs visible in movies throughout the decades, but the very museum itself was featured in Tim Burton’s Mars Attacks. The visitors’ center is also housed inside the former La Concha Motel lobby, which was featured in Martin Scorsese’s Casino.

Start the New Year with the Latest from Peppa Pig and PJ Masks!