Disclosure:  I received a copy of Yesterday in order to facilitate my review.  All opinions are my own.

Includes original musical performances not seen in theaters, an alternate opening, and ending, gag reel, loads of deleted scenes and more. Bring family and friends together with The Beatles’ music inspired film Yesterday, on Digital September 10, 2019, and on 4K Ultra HD, Blu-ray™, DVD and On-Demand September 24, 2019.

If you are ready for a feel-good movie then Yesterday is just what you are looking for.  For just a while you will be taken back with the Beatles themed songs and finish the movie smiling.

COME TOGETHER WITH THE UNFORGETTABLE MUSIC OF THE BEATLES AND BREAKOUT PERFORMANCES BY HIMESH PATEL, LILY JAMES, KATE MCKINNON, AND ED SHEERAN
IN THE FEEL-GOOD COMEDY

INCLUDES ORIGINAL MUSICAL PERFORMANCES NOT SEEN IN THEATERS, AN ALTERNATE OPENING AND ENDING, GAG REEL, LOADS OF DELETED SCENES AND MORE
ON DIGITAL SEPTEMBER 10, 2019
4K ULTRA HD, BLU-RAY™ AND DVD SEPTEMBER 24, 2019
FROM UNIVERSAL PICTURES HOME ENTERTAINMENT
“I BELIEVE IN YESTERDAY AND YOU WILL TOO'”
— MIKE REYES, CINEMABLEND
ONE OF THE BEST-LOVED FILMS OF THE YEAR WITH AN 89% AUDIENCE SCORE ON
ROTTEN TOMATOES

Universal City, California, August 13, 2019 – Bring family and friends together with The Beatles’ music inspired film Yesterday, on Digital September 10, 2019, and on 4K Ultra HD, Blu-ray™, DVD and On-Demand September 24, 2019. Jack’s life is changed forever when he discovers he is the only person on earth who remembers the music of The Beatles and must decide if he truly wants the spotlight, or if all he needs is love, after all. Filled with heart and humor from beginning to end, Yesterday on 4K Ultra HD, Blu-ray™, DVD and Digital comes packed with exciting bonus features including deleted and extended scenes, live performances at the iconic Abbey Road Studios, an alternate opening and ending and several featurettes with the filmmakers and cast that take fans further into the charming story. Hailed as “Funny, original, and touching” (Patrick Stoner, “Flicks” WHYY-TV (PBS)), Yesterday is a rock-n-roll comedy about music, dreams, friendship, and the long and winding road that leads to the love of your life. Stay in, “re-experience the Beatles’ songs as if they’re brand-new” (Mara Reinstein, Billboard) and celebrate the 50th Anniversary of The Beatles’ Abbey Road this year with the perfect at-home movie night when you own Yesterday on 4K Ultra HD, Blu-ray™, DVD and Digital.

Jack Malik was just another struggling songwriter…but that was yesterday. After a mysterious blackout, Jack (Himesh Patel; BBC’s “EastEnders”) discovers he is the only person on earth who remembers The Beatles! As he rockets to fame by passing off the Fab Four’s songs as his own, Jack risks losing Ellie (Lily James; Mamma Mia! Here We Go Again, Cinderella) – the one person who has loved him and believed in him from the start. Kate McKinnon and Ed Sheeran also star in this romantic rock ‘n’ roll comedy from Academy Award®-winning director Danny Boyle (Slumdog Millionaire, Trainspotting, 28 Days Later) and Academy Award®-nominated screenwriter Richard Curtis (Four Weddings and a Funeral, Love Actually).

The soundtrack to YESTERDAY is available on digital/streaming services as well as CD from Capitol Records/Polydor Records. The album will be available on vinyl this Friday, August 16.

Yesterday will be available on 4K Ultra HD in a combo pack (4K Ultra HD+ Blu-ray™ + Digital). Bonus features on the 4K Ultra HD will all be delivered in stunning 4K resolution.

In this clip from the bonus feature, “Soul Mates,” stars Lily James and Himesh Patel chats about the close friendship and romance between their characters Ellie and Jack in Yesterday.

In this clip from the bonus feature, “A Talented Duo,” director Danny Boyle talks about the joys of working on a romantic comedy with writer and producer Richard Curtis and shows them behind the scenes on the set of Yesterday. 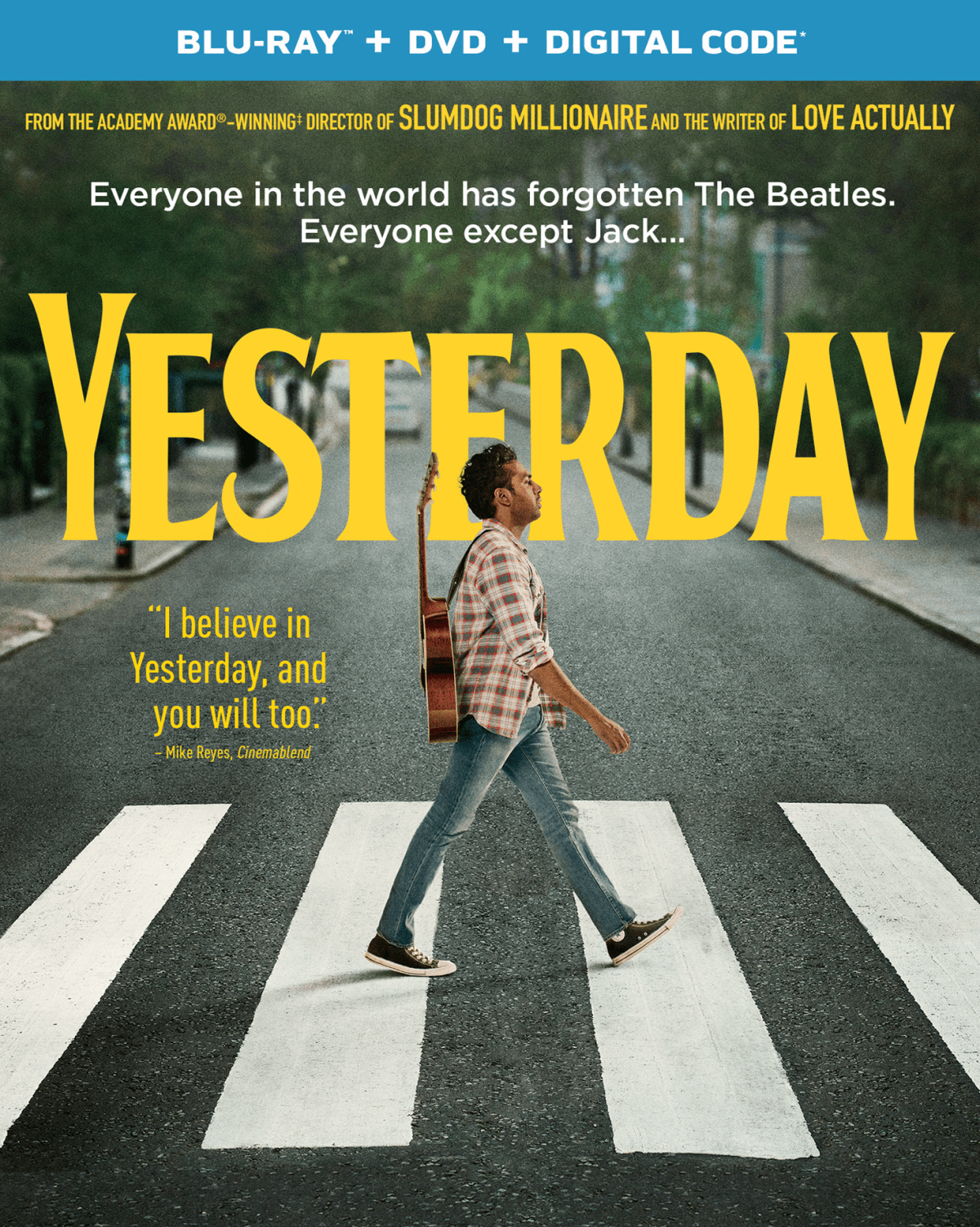