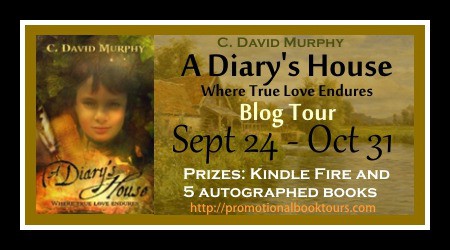 A Diary’s House is about adventure, lost love, and the hope that dreams, even those in the final years of life, can at last prevail. It is of a young boy’s attempt to become a man, the once-lost secrets of a diary, a sweeping romance which transcends time and place. It is more than a boy’s journey into manhood, but the mysteries of so many lives unknowingly intertwined, now brought together in a climatic ending; all from the engrossing world embedded in a forgotten diary; a diary of a woman.

Born in the vast and looming mountains of North Carolina during the 1870’s, Landon Hampshire always remembered the folklore and legendary tales his father told him during his early childhood; about the people of the Kituhwa (Cherokee) and the birth of this tribal nation – an enchanting story he could never forget. Incorporating the aid of an eccentric old French trapper (old man Montague), Landon and his friends set out on an adventure, their initial intention is to discover treasure and become men. But what Landon will eventually come to discover is more than he ever bargained for.

Landon didn’t realize his boyhood adventure would yield the incredible journey he ultimately experiences – going down the mysterious and mystical Randola River. At the base of the river is an island even more mysterious than the Randola itself.

The island releases many of its mysterious, yet even many more are created when Landon discovers, on the island, a diary of a young woman who lived forty years prior during the 1830’s (Trail of Tears). The diary entries are hopeful, though haunting. It reveals, in intimate detail, the life and dreams of this very special young girl who is turning into a woman of beauty and adventure, her love for a Cherokee boy, and the trials she will ultimately face. Her story unfolds through the reading of her diary, and Landon suddenly finds himself caught up in a sweeping, empowering world of re-invention and ultimate redemption.

I am a writer; first and foremost. Anyone who reads my works will instantly know this. I have found no greater joy on this earth than to be close to God and nature; exploring the serenity of landscapes, waterfalls, epic mountains, meadows and grasslands. To sit on those spots of earth and write to where my imagination will take me yields a tremendous amount of peace and serenity.. To create characters with true and genuine emotions, feel their heartbeat thru every word I write; their trails, their hopes and ambitions; to breathe life into their eyes and see their soul become one with me and the reader is absolutely amazing. I simply love to create on that venue and canvas; to affect change in the lives of others. It is my hope, when someone picks up my stories and reads the full weight of them, that somehow I have affected change in their lives, brought them to places they could never have imagined before, and moved them to believe in humanity again – to go out into the world and create ‘goodwill towards all’.

The Diary’s House is C David Murphy’s first digitally published novel. He is also the author of two Shakespearean-style genre plays In the Years of the Ages and Hildengrass. He is currently finalizing his next novel, When Tomorrow Never Comes and The Chronicles of Good and Evil – Dracula’s Lair / The Darkest Tower, both due out later this year. Also, the sequel to A Diary’s House is in the works – The Long Journey Home due out the first part of 2013.