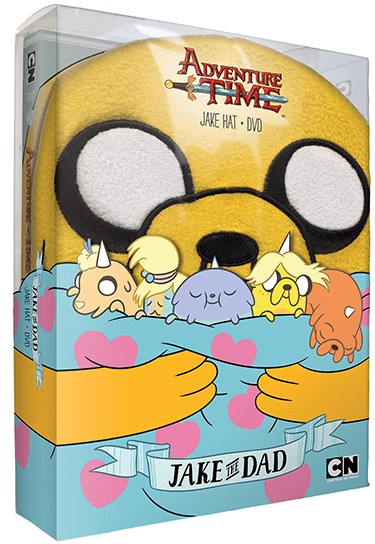 *DISCLAIMER – I received no compensation for this post! All information and videos or pictures provided by ClickComm*
On September 17th snuggle up with your favorite Adventure Time characters as Cartoon Network Enterprises brings fans the newest DVD, ADVENTURE TIME: JAKE THE DAD, along with the most awesome Jake hat as part of the on-pack bundle!! Enjoy nearly three hours of fun with your very own Jake hat in this righteous release!

WHAT TIME IS IT?! Time to snag your very own JAKE HAT! That’s right fans, this September not only will Cartoon Network introduce the newest DVD release in its top-selling franchise from its massive hit series, but it will also toss in a Jake hat, to boot. Adventure Time: Jake the Dad, the all-new compilation DVD release, features 16 popular episodes from seasons four and five of the series, PLUS a must-have Jake hat included as an on-pack bundle, which makes a perfect complement to the Finn hat fans got with last year’s release of Adventure Time: Jake vs. Me-Mow! With nearly three hours of episodes and an awesome hat – which is worth $20 on its own! – the Adventure Time: Jake the Dad DVD release will be available at retail on September 17 and is priced to own at $24.98. Retailer pre-orders for the release are due August 13.

Along with a Little Did You Know character special feature – and the aforementioned sweet hat – theAdventure Time: Jake the Dad DVD features the following episodes:

Created by Pendleton Ward and produced by Cartoon Network Studios, Adventure Time leads viewers on the fantastical adventures of unlikely heroes, Finn & Jake, buddies who traverse the mystical Land of Ooo and encounter its colorful inhabitants. New episodes from the fifth season of Adventure Time premiere on Monday nights at 7:30 p.m. (ET/PT) on Cartoon Network with replays throughout the week.

Cartoon Network Enterprises (CNE) is responsible for building consumer products and merchandising programs for a wide range of brands by securing and supporting long-term licensing partnerships across all categories. As the global branding and merchandising arm of Cartoon Network and Adult Swim, the division manages the consumer product programs for the networks’ award-winning original programming, brands and characters including Ben 10, Adventure Time, Regular Show, The Amazing World of Gumball, The Powerpuff Girls,Adult Swim and more. CNE also serves as the exclusive global licensing agent for LazyTown Entertainment and the PGA of America for the youth marketplace.

Cartoon Network (CartoonNetwork.com) is the #1 U.S. television network among boys 6-11. Currently seen in 99 million U.S. homes and 194 countries around the world, Cartoon Network is Turner Broadcasting System, Inc.’s ad-supported cable service now available in HD offering the best in original, acquired and classic entertainment for kids and families. In addition to Emmy-winning original programming and industry-leading digital apps and online games, Cartoon Network embraces key social issues affecting families with solution-oriented initiatives such as Stop Bullying: Speak Up and the Move It Movement.

For more information on this and other titles distributed by Warner Bros Home Entertainment Group, visit www.whvdirect.com