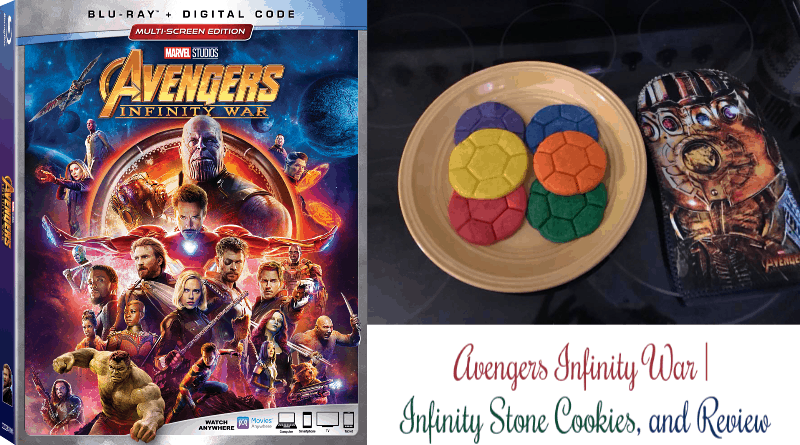 Disclosure: We received a copy of Avengers Infinity War, and products to make our Infinity Stone Cookies in order to facilitate our review. All opinions are our own. 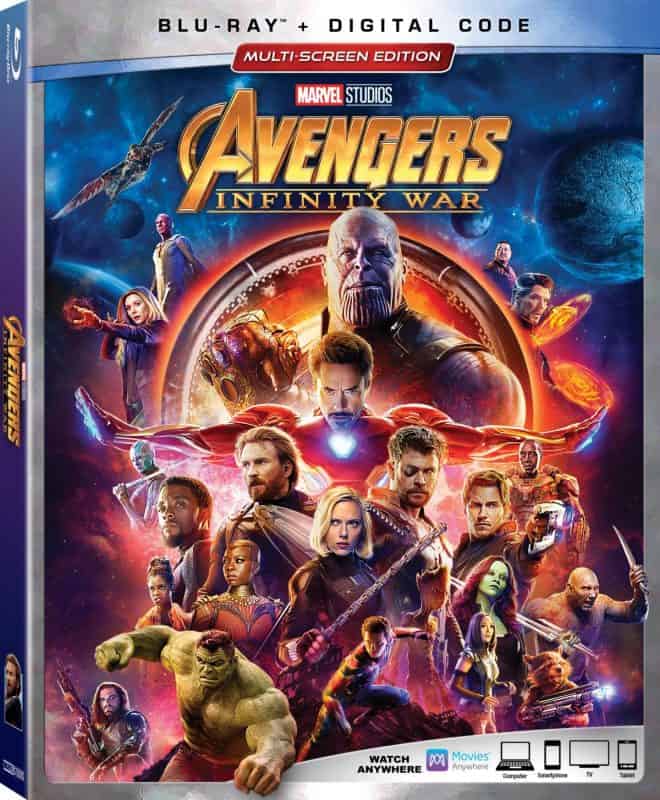 The most anticipated movie for Marvel fans. It’s come down to this: The showdown with Thanos (Josh Brolin) and the Avengers. But, the Avengers are also joined with The Guardians of the Galaxy for this epic battle!

In the movie, Thanos’ quest for the Infinity Stones takes him from space to Earth, where two of the Stones are located. He will have to fight against superheroes like Captain America (Cris Evans), Black Widow (Scarlett Johanson), Black Panther (Chadwick Boseman) and Scarlet Witch (Elizabeth Olsen).

I loved the movie for its action, it’s humor, and the storylines from past movies being continued. It is a must-see for anyone who loves superhero movies. It is non-stop action from beginning to end. If you’re a Marvel fan, like I am, you’ll want to keep watching for the end credits scene……no spoilers!

I think this is the best Marvel movie ever…..or, at least until Avengers 4 comes out next year!

About the Infinity Gauntlet

Forged out of precious Uru metal, the Infinity Gauntlet’s sole purpose is to harness the absolute power of the six Infinity Stones, which control the six essential aspects of existence:

Considered to be the most powerful object in the known universe, it’s capable of providing the wielder the ability to reshape reality at their whim. Which is why it has been the absolute focus of Thanos since he was made aware of its existence.

About The Infinity Stones

Blue- The Space Stone/ The Tesseract generates wormholes for travel to distant places.

Yellow- The Mind Stone/Vision gives you the ability to manipulate the minds of others.

Red- The Reality Stone/ The Aether has the power to transform matter.

Purple-The Purple Stone/Orb has the power to destroy whole civilizations.

Green-The Time Stone/ The Eye of Agamotto has the power to be able to alter and manipulate time.

Orange- The Soul Stone/Unknown has an unknown power! 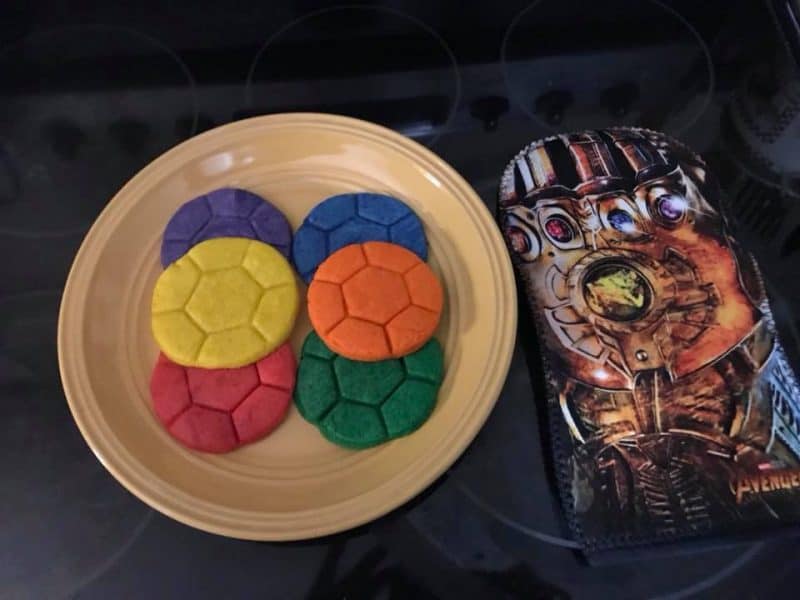 Sift flour, baking powder and salt into a bowl.

put butter and sugar in the bowl of an electric mixer with the paddle attachment.

Mix on medium speed until pale and fluffy.

Add eggs and vanilla. Reduce speed to low and mix until combined.

Gradually add in the flour mixture and mix on low increasing the speed as needed. Add a little at a time and mix until combined. 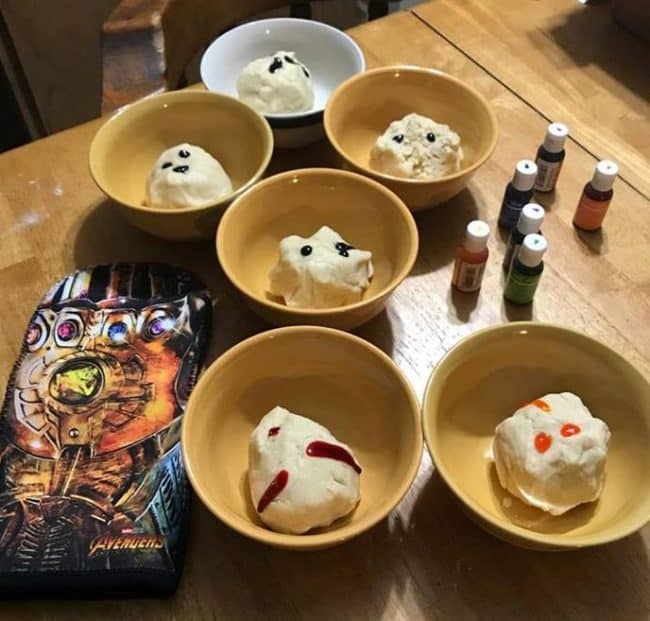 At this point, you can add the food color to your dough.

Wrap each portion in plastic wrap.

Refrigerate until firm, at least one hour or overnight.

Let disk of dough stand at room temperature just until soft enough to roll, about 10 minutes.

Cut out your Infinity Stone Shapes.  You can use a soccer ball shape or just a circle. 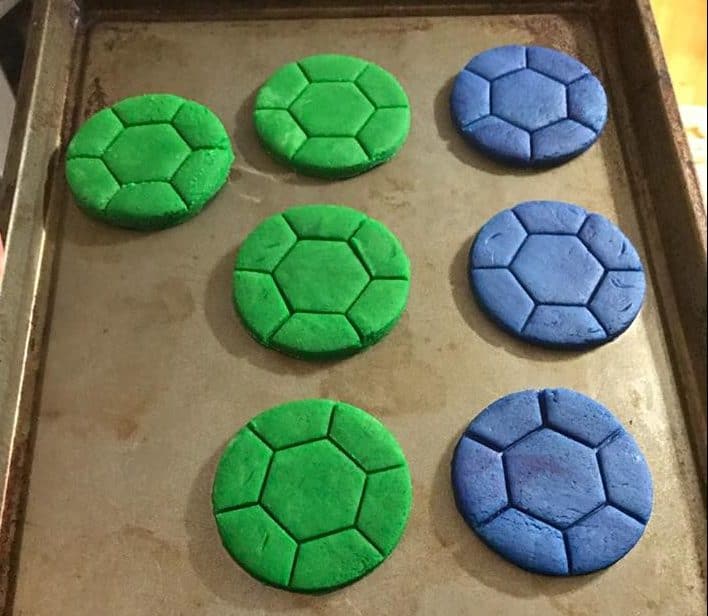 Remove the excess dough and place the mat with the cutouts in the freezer until the dough is very firm about 15 minutes.

Bake for 7-11 minutes. Baking times will vary so keep a close eye on them. Remove from oven and let them cool on wire racks.

Keep adding and mixing until you get the exact shade of the color you want. I think we added 6-8 drops for some of the colors. 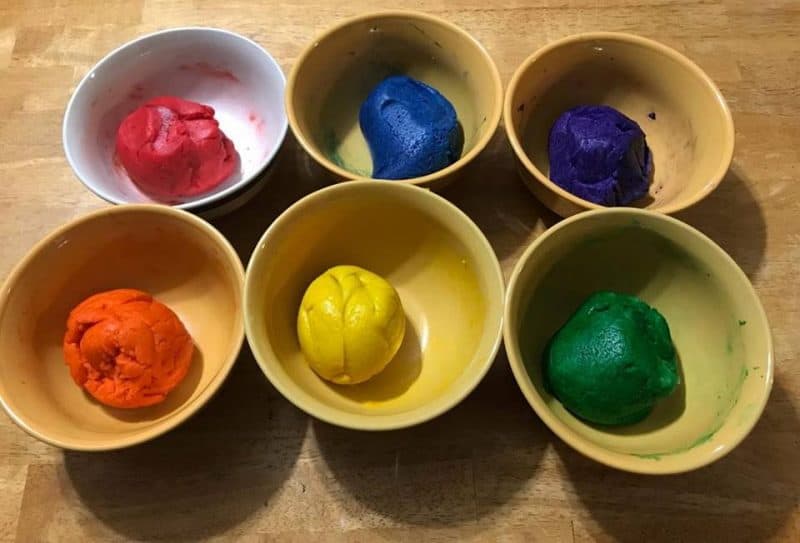 Use food Safe gloves or you might end up with rainbow colored hands.

Infinity Stone Sugar Cookies
Recipe Type: Dessert
Author: Marvel (Disney)
If you want to have a treat to go with your Avengers: Infinity War Movie, this might be exactly what you are looking for.
Ingredients
Instructions
3.2.2802
MARVEL STUDIOS’
“AVENGERS: INFINITY WAR”
ARRIVES DIGITALLY ON JULY 31
AND BLU-RAY ON AUG. 14
Go behind the scenes of the No. 4 film of all time to gain exclusive access to more than two hours of never-before-revealed details of its unprecedented, ten-year cinematic journey which includes an epic filmmaker roundtable, an inside look at the surprising Super Hero pair-ups, deleted scenes and more!
— Box office history was made when Marvel Studios’ “Avengers: Infinity War” shattered all opening records, surpassed the $2 billion mark at the global box office in just 48 day, and remains the fourth highest-grossing film of all time. Now, the cinematic event ten-years in the making comes home Digitally on July 31 and Blu-ray on Aug. 14 with over two hours of bonus.

“Marvel’s Avengers: Infinity War” is a must-own addition to every in-home film collection and is packaged several ways so that fans get the most out of their viewing experience. Consumers who experience the ultimate showdown Digitally will join a 30-minute roundtable with Marvel Cinematic Universe (MCU) directors Anthony and Joe Russo, Jon Favreau, Joss Whedon, James Gunn, Ryan Coogler, Peyton Reed and Taika Waititi who reflect on how their movies contribute to the MCU’s larger storytelling adventure.

And for those who wish to catch up on their MCU history, select retailers are also offering bundled packaging as well as individual Digital and Physical releases of “Marvel’s The Avengers” and “Avengers: Age of Ultron.”

Disclosure: Some of the links in this post are 'affiliate links.' This means if you click on the link and purchase the item, I will receive an affiliate commission.