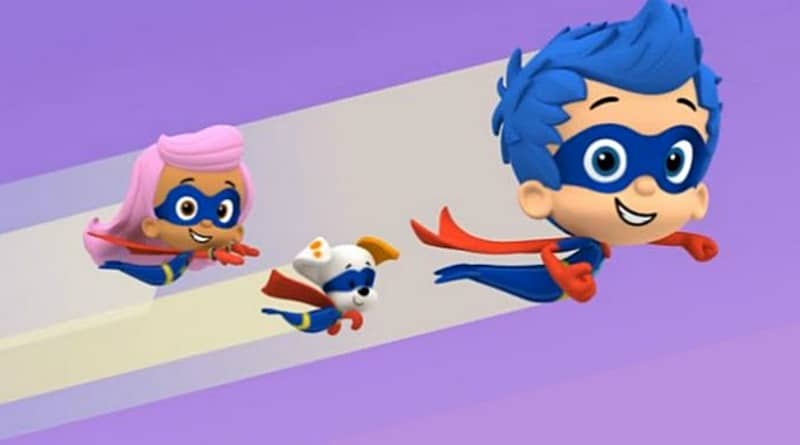 HEROES CAN BE FOUND IN ALL SHAPES AND SIZES…

AND EVEN UNDERWATER! with the Bubble Guppies

Disclosure:  I received a copy of this dvd in order to facilitate my review.  All opinions are my own.
I have to tell you that the Bubble Guppies holds such a place in my heart.  I know it probably sounds odd but it does.  When I became a Grandma for the first time it was to a 2 1/2-year-old little girl named Emma.  I always would tell people we inherited her but now when I look at her at 6 1/2 year old she is just ours.  We would watch Bubble Guppies together and sing the songs.  Her Papa would dance to the ‘what time is it, it’s time for lunch’….and she would laugh and laugh.
Now I can share the Bubble Guppies with our grandson who just turned 2  almost a month ago.  Time goes way too fast.
We mainly enjoy this show because it does a great job of hiding education with fun. They teach about animals, promote complex thinking skills, matching, memory, colors, and math. Definitely a great suggestion for toddlers.  And now that they are “super guppies” your child can enjoy the whole super feeling and continue to learn.
BUBBLE GUPPIES:
SUPER GUPPIES
Available on DVD May 16, 2017 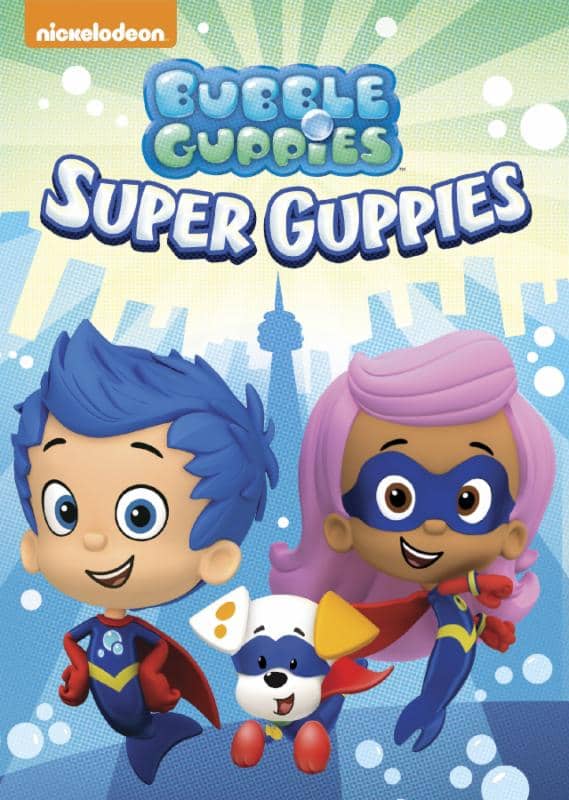 NEW YORK – April 11, 2017 – The Bubble Guppies are back with an all-new DVD collection featuring five heroic “tails” in Bubble Guppies: Super Guppies. Whether they’re diving into a comic book, going on a treasure hunt or helping to keep the streets safe, the Bubble Guppies prove that being a hero is a lot more than just fighting crime. Produced by Nickelodeon Home Entertainment and distributed by Paramount Home Media Distribution, Bubble Guppies: Super Guppies will be available on DVD May 16, for the suggested retail price of $14.99.
Pre-order on Amazon (aff link)

Street Date: May 16, 2017
Catalog: 59187382000 (US); 59187383000 (CAN)
Running Time: 114 minutes
S.R.P. $14.99
About Nickelodeon
Nickelodeon, now in its 37th year, is the number-one entertainment brand for kids. It has built a diverse, global business by putting kids first in everything it does. The company includes television programming and production in the United States and around the world, plus consumer products, online, recreation, books and feature films. Nickelodeon’s U.S. television network is seen in more than 90 million households and has been the number-one-rated basic cable network for 20 consecutive years. For more information or artwork, visit http://www.nickpress.com. Nickelodeon and all related titles, characters and logos are trademarks of Viacom Inc. (NASDAQ: VIA, VIAB).
About Paramount Home Media Distribution
Paramount Home Media Distribution (PHMD) is part of Paramount Pictures Corporation (PPC), a global producer and distributor of filmed entertainment.  PPC is a unit of Viacom (NASDAQ: VIAB, VIA), a leading content company with prominent and respected film, television and digital entertainment brands.  The PHMD division oversees PPC’s home entertainment, digital and television distribution activities worldwide. The division is responsible for the sales, marketing and distribution of home entertainment content on behalf of Paramount Pictures, Paramount Animation, Paramount Vantage, Paramount Classics, Insurge Pictures, MTV, Nickelodeon, Comedy Central and CBS and applicable licensing and servicing of certain DreamWorks Animation titles.  PHMD additionally manages global licensing of studio content and distribution across worldwide digital and television distribution platforms including online, mobile and portable devices and emerging technologies.
0 Shares
Tweet
Share
Pin
Share
Share