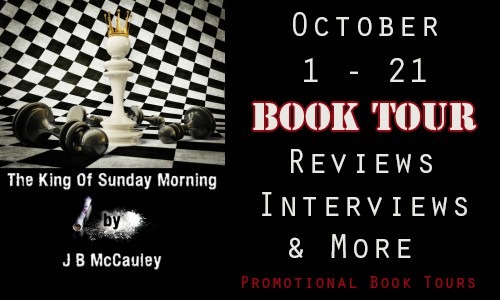 The King of Sunday Morning is a geezer. Not in the traditional sense of the word as in old man. This geezer is a face, a wannabe, a top notch bloke. He is the greatest DJ that never was. He should have been. Could have been. Would have been. Now becoming a has-been.

Tray McCarthy was born into privilege but with the genetic coding of London’s violent East End. Having broken the underworld’s sacred honour code, it is only his family’s gangland connections that save him. But in return for his life, he must deny that which he has ever known or ever will be and runs to Australia where he is forced to live an inconsequential life.

But trouble never strays far from Tray McCarthy and eventually his past and present collide to put everyone he has ever loved in danger. He must now make a stand and fight against those that are set to destroy him and play their game according to his rules.

Set against the subterfuge and violence of the international drugs trade, The King of Sunday Morning is the tale of what can go wrong when you make bad decisions. Tray McCarthy has made some of the worst. He must now save those he holds dear but in the process gets trapped deeper and deeper into a world where he doesn’t belong.

“I want three pump-action shotguns, about twelve sticks of dynamite and a blowtorch”

THIS BOOK CONTAINS EXPLICIT LANGUAGE, FREQUENT DRUG USE, AND SEX SCENES – NOT RECOMMENDED FOR PEOPLE UNDER 18 YEARS OF AGE

Tags
The King of Sunday