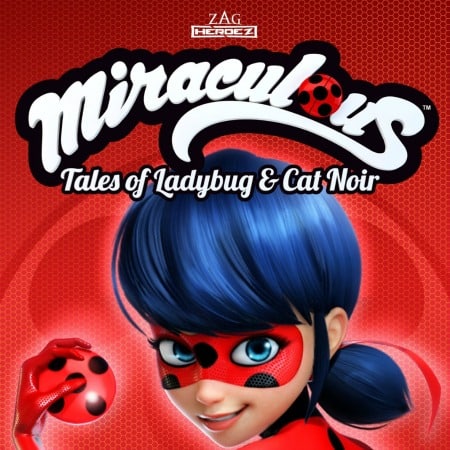 COMES TO DVD FROM SHOUT! KIDS 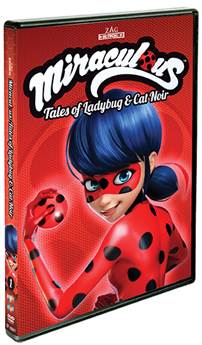 Marinette and Adrien, two seemingly normal kids  live what appears to be an ordinary teen life in Paris with daily encounters that create amusing circumstances in school,  with friends, family, and even with strangers. But when the evil Hawk Moth threatens their beloved city of Paris, they transform into the superheroes Ladybug and Cat Noir using super powers gained with the help of their magical friends. Hawk Moth is using his evil energy to transform normal people into super villains, so our two heroes need to use all their skills to defeat him.

Becoming Ladybug is a complicated process. First, Marinette needs a “Kwami,” which is a tiny magical assistant (called Tikki). She also needs a “Miraculous,” which is a magical accessory (her special pair of earrings). Tikki uses the Miraculous to transform Marinette, but her Ladybug super powers only work for a limited time!

It is a good thing that she gets a little help from her superhero partner, Cat Noir even though she insists she doesn’t need him. If only she knew Cat Noir’s true identity – her school crush, Adrien! It will take a lot – friendship, teamwork, and skill – to outwit Hawk Moth. Will Ladybug and Cat Noir be able to balance their double lives and keep Paris safe? Will they ever find out each other’s true identity? Until then – there is a whole city of baddies to defeat… SPOTS ON, CLAWS OUT!

ZAG, a privately held firm founded by Jeremy Zag, specializes in the creation and global distribution of kids and family entertainment franchises such as Miraculous™: Tales of Ladybug & Cat Noir. ZAG’s multiple divisions located in United States, Europe and Asia focus on the production of high-quality CGI animated and hybrid (live action and animation) feature films, TV series and games with a 360 approach including digital content and music.  Zagtoon established in 2009 in partnership with veteran, Jacqueline Tordjman, has produced almost 200 half-hours of original content, which airs on major broadcast channels in over 120 markets worldwide. Other divisions include its Feature Film division ZAG Animation Studios (joint-venture created in 2014 with Michael Barnathan and Chris Columbus), ZAG Digital and ZAG Records. Visit us at www.zag-inc.com,

http://www.miraculousladybug.com/, or for any inquiries on ZAG or about Miraculous contact us at [email protected].