If you are anything like me you probably have a child or grandchild that just loves Paw Patrol! For me, it is my almost 5-year-old grandson.  He is Paw Patrol everything! 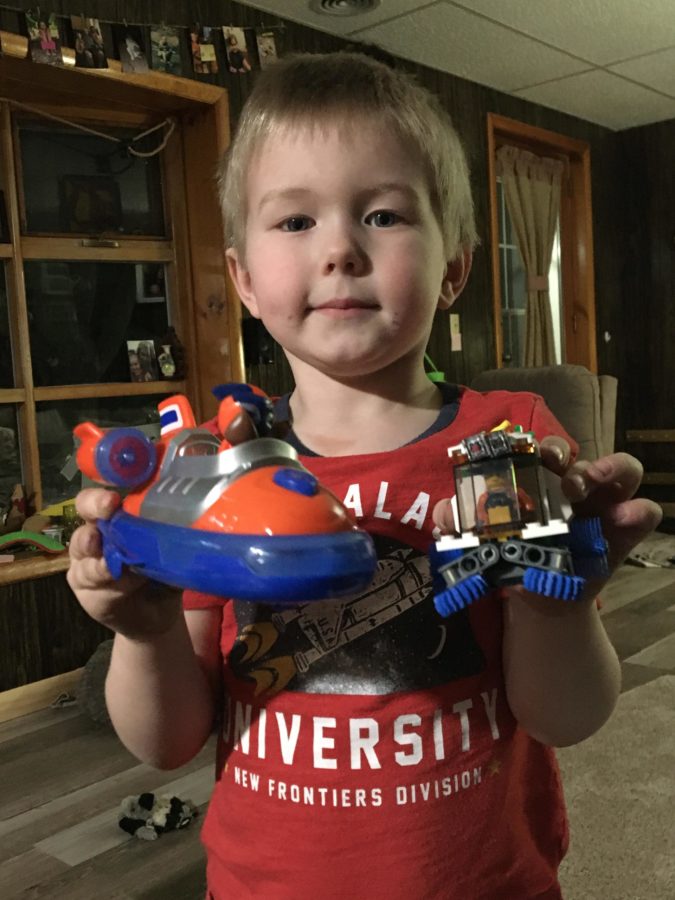 Above: Zakary sporting his newest Paw Patrol vehicle with Zuma and his second love Legos.

NEW YORK – February 27, 2020 – PAW Patrol is on a roll! The Mighty Pups are back and ready to use their superpowers to help those in need. In this all-new adventure, they team up with their new super pals, the Mighty Twins! There’s more mighty action than ever in the PAW Patrol: Mighty Pups Super Paws DVD, arriving March 3, 2020. Packed with favorite characters, new surprises, and more, the PAW Patrol: Mighty Pups Super Paws DVD will be available from Paramount Home Entertainment and Nickelodeon Home Entertainment for the suggested retail price of $10.99.

PAW Patrol: Mighty Pups Super Paws synopsis:
The pups are ready for MORE mighty action in these six Mighty Pups Super Paws episodes, including two double missions! Havoc takes over the town as the Mayor and the Kitty Catastrophe Crew receive these new superpowers, causing super problems! Then the pups and their new Mighty Twin friends save the town’s treasures from a new super-bandit villain named Ladybird! It’ll take the Mighty Pups and their Super Paws to stop them and restore order to Adventure Bay! Plus, everyone gets a BIG surprise when Chickaletta gets mighty powers too!

About Nickelodeon
Nickelodeon, now in its 40th year, is the number-one entertainment brand for kids. It has built a diverse, global business by putting kids first in everything it does. The brand includes television programming and production in the United States and around the world, plus consumer products, digital, location-based experiences, publishing and feature films. For more information or artwork, visit http://www.nickpress.com. Nickelodeon and all related titles, characters and logos are trademarks of ViacomCBS Inc. (Nasdaq: VIACA, VIAC).

Enter for Your Chance to Win a Copy of PAW Patrol: Mighty Pups Super Paws DVD

You must be 18 years or older to enter and a resident of the U.S.

Disclosure:
We reserve the right to make revisions, to cancel, or suspend this contest for any reason. We are not associated with any of the companies named above. The odds of winning are based on the number of entries received Open to the US 18+ only. Confirmed Winner(s) (by Rafflecopter.com) will be contacted by email. Winner(s) have 24 hours to respond before a new winner is chosen. No purchase necessary. Void where prohibited by law. The sponsor(s) will be responsible for product shipment to winner(s) of this giveaway. [What U Talking Bout Willis?](//whatutalkingboutwillis.com) (and any other blog participating) is not responsible for product shipment/delivery. This event is in no way administered, sponsored, or endorsed by, or associated with, Facebook and/or Twitter, Google, Pinterest. This disclosure is done in accordance with the Federal Trade Commission 10 CFR, Part 255 Guides Concerning the Use of Endorsements. Entrants must only enter with either one email address, IP address and/or Facebook account, anyone found violating these rules will be disqualified. It is at the sole discretion of the admin of the giveaway if the winner has met the rules or not.