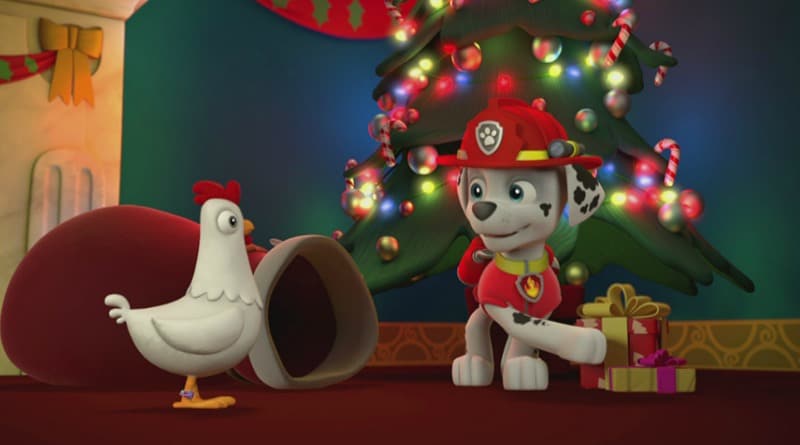 Available on DVD November 1, 2016
NEW YORK – September 20, 2016 – Unwrap a high-action adventure this holiday season with a collection from one of the hottest preschool series on TV, PAW Patrol: Pups Save Christmas. This latest puppy collection features daring rescues with just the right amount of holiday cheer! Join Ryder, Chase, Everest and the rest of the gang as they embark on snow-filled adventures to help Santa save Christmas, rescue penguins and polar bears, and much more. Whether they’re feeling festive, competitive or silly, it’s no secret that the pups are here to bring a little extra joy to this holiday season. Produced by Nickelodeon Home Entertainment and distributed by Paramount Home Media Distribution, PAW Patrol: Pups Save Christmas will be available on DVD November 1, for the suggested retail price of $14.99.
PAW Patrol: Pups Save Christmas includes the following episodes:
PAW Patrol: Pups Save Christmas Fast Facts
Street Date: November 1, 2016
Catalog: 59180585000 (US)
Running Time: 74 Minutes
Audio: English 5.1 Dolby Digital, French Dolby Surround and Spanish Dolby Surround
(French and Spanish audio not included on “Pups Save Sports Day” and “Pups Bear-ly Save Danny”)
S.R.P.: $14.99
About Nickelodeon
Nickelodeon, now in its 37th year, is the number-one entertainment brand for kids. It has built a diverse, global business by putting kids first in everything it does. The company includes television programming and production in the United States and around the world, plus consumer products, online, recreation, books and feature films. Nickelodeon’s U.S. television network is seen in more than 90 million households and has been the number-one-rated basic cable network for 20 consecutive years. For more information or artwork, visit http://www.nickpress.com. Nickelodeon and all related titles, characters and logos are trademarks of Viacom Inc. (NASDAQ: VIA, VIAB).
About Paramount Home Media Distribution
Paramount Home Media Distribution (PHMD) is part of Paramount Pictures Corporation (PPC), a global producer and distributor of filmed entertainment.  PPC is a unit of Viacom (NASDAQ: VIAB, VIA), a leading content company with prominent and respected film, television and digital entertainment brands.  The PHMD division oversees PPC’s home entertainment, digital and television distribution activities worldwide. The division is responsible for the sales, marketing and distribution of home entertainment content on behalf of Paramount Pictures, Paramount Animation, Paramount Vantage, Paramount Classics, Insurge Pictures, MTV, Nickelodeon, Comedy Central and CBS and applicable licensing and servicing of certain DreamWorks Animation titles.  PHMD additionally manages global licensing of studio content and distribution across worldwide digital and television distribution platforms including online, mobile and portable devices and emerging technologies.
0 Shares
Tweet
Share
Pin
Share
Share

Beyond Valkyrie: Dawn of the 4th Reich