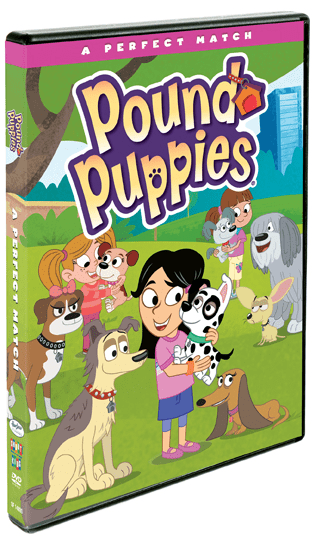 On April 8th, Shout! Factory Kids in collaboration with Hasbro Studios, is set to release Pound Puppies: A Perfect Match on DVD! Join Lucky, Cookie, Niblet, Strudel and Squirt as they continue on their mission to find a person for every pup!

Not every puppy is perfect for every person, and the Pound Puppies are dedicated to making sure their furry friends end up in the right hands!  On April 8th, 2014, join Lucky, Cookie, Niblet, Strudel and Squirt as they continue on their mission to find a person for every pup with the release of Pound Puppies: A Perfect Match on DVD. Featuring five fun-filled adventures, this DVD collection is priced to own with an SRP of $9.99.

The Pound Puppies find they have their paws full with their newest adventures! In A Perfect Match, the Pound Puppies come to the rescue when a so-called “un-matchable puppy” finally finds his match – and loses him,  assist a shy puppy on a High Energy Scouts camping trip,  help a furless pup to bolster his confidence, and they have to investigate why a paper girl’s deliveries are always late!

Winner of the 2012 Humanitas Prize in Children’s Animation, the Pound Puppies series is currently airing on The Hub in the U.S. and YTV in Canada and stars the voices of Eric McCormack, Yvette Nicole Brown, Michael Rapaport, John DiMaggio, Alanna Ubach, René Auberjonois, and M. Emmet Walsh.

Transformers: Rescue Bots ­ Heroes on the Scene on DVD 3/18!