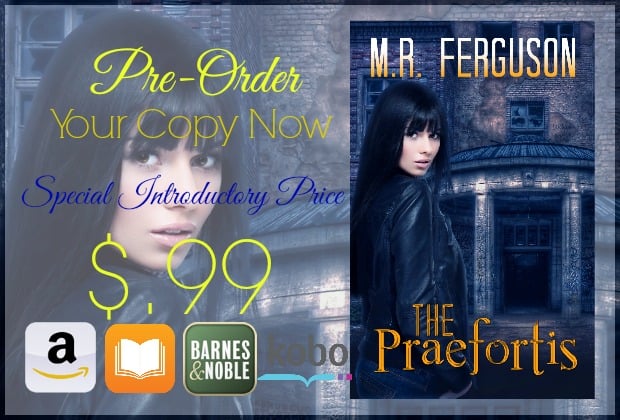 It was the screams that got to her. Everyone in the town of Tanner knew that Old Man Conrad  beat his wife. That didn’t mean anyone did anything about it.  But tonight, Zoe couldn’t  stop herself.

The Praefortis by M.R. Ferguson

Zoe Masterson always felt like an outsider. She’s different from everyone else in her rural West Virginia town: destruction and mayhem follow her around like a rabid dog. After a mysterious fire leads to a death, Zoe ends up in what looks like a mental hospital—but is it? At Weston State Hospital, she discovers that the world as she knows it is an illusion. So much more exists beneath the surface of life: races of people, Guardians, Assassins. . .and the one person she is destined to love forever, all caught up in a battle for control of this hidden world that could cost her the people she loves most.

M. R. Ferguson has a passion for the paranormal that influences her writing and photography. Believing that anything can be possible gives her a sense of adventure, pushing her stories to a place her readers dare not venture on their own. “Dare to believe” is her motto, which stands to reason as she lives in a haunted house with her three dogs, cat and cockatoo. Wishing that fall would last all year, she plans for football season, Halloween and cooler temperatures as soon as June hits.