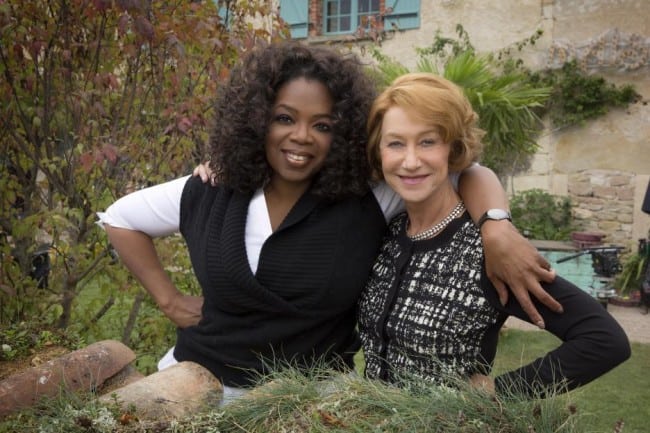 Starring Academy Award®-Winner Helen Mirren, Based on the Best-Selling Novel!

Production has begun on the feature film adaptation of DreamWorks Pictures’ THE HUNDRED-FOOT JOURNEY, starring Academy Award®-Winner Helen Mirren, based on the best-selling novel! Lasse Hallström is directing with Steven Spielberg, Oprah Winfrey (pictured below with star Helen Mirren) and Juliet Blake producing. The movie opens in theatres on August 8th, 2014!

BASED ON THE BEST-SELLING NOVEL

BURBANK, Calif. (October 9, 2013) – Production has begun in southwest France on “The Hundred-Foot Journey,” based on the best-selling novel by Richard C. Morais. Starring Academy Award®-winner Helen Mirren, and directed by Oscar® nominee Lasse Hallström, the film will be released on August 8, 2014 in the U.S.

In “The Hundred-Foot Journey,” Hassan Kadam (Manish Dayal) is a culinary ingénue with the gastronomic equivalent of perfect pitch. Displaced from their native India, the Kadam family, led by Papa (Om Puri), settles in the quaint village of Saint-Antonin-Noble-Val in the south of France. Filled with charm, it is both picturesque and elegant – the ideal place to settle down and open an Indian restaurant, the Maison Mumbai. That is, until the chilly chef proprietress of Le Saule Pleureur, a Michelin starred, classical French restaurant run by Madame Mallory (Helen Mirren), gets wind of it. Her icy protests against the new Indian restaurant a hundred feet from her own escalate to all out war between the two establishments – until Hassan’s passion for French haute cuisine and for Mme. Mallory’s enchanting sous chef, Marguerite (Charlotte Le Bon), combine with his mysteriously delicious talent to weave magic between their two cultures and imbue Saint-Antonin with the flavors of life that even Mme. Mallory cannot ignore. At first Mme. Mallory’s culinary rival, she eventually recognizes Hassan’s gift as a chef and takes him under her wing.

“The Hundred-Foot Journey” abounds with flavors that burst across the tongue. A stimulating triumph over exile, blossoming with passion and heart, with marjoram and madras, it is a portrayal of two worlds colliding and one boy’s drive to find the comfort of home, in every pot, wherever he may be.

“The Hundred-Foot Journey” is directed by acclaimed Academy Award® and Golden Globe® nominee Lasse Hallström from a script by Steven Knight and is based on the international best-selling novel of the same name by Richard C. Morais. The movie’s producers are Steven Spielberg, Oprah Winfrey and Juliet Blake. The film’s executive producers are Caroline Hewitt and Carla Gardini.  Raphael Benoliel is co-producer.

DreamWorks Studios is producing, with Participant Media co-financing. Mister Smith Entertainment is handling foreign sales to Europe, Africa and the Middle East, DreamWorks’ partner Reliance will distribute in India, with Disney handling the remaining international territories. Disney will distribute the film theatrically in the U.S.

DreamWorks Studios is a motion picture company formed in 2009 and led by Steven Spielberg and Stacey Snider in partnership with The Reliance Anil Dhirubhai Ambani Group. The company’s recent releases include Spielberg’s “Lincoln,” starring Daniel Day-Lewis, Sally Field and Tommy Lee Jones. The film has grossed over $270 million at the worldwide box office and was nominated for twelve Academy Awards® with Daniel Day-Lewis winning for Best Actor. Other releases include “Real Steel,” starring Hugh Jackman and directed by Shawn Levy, Steven Spielberg’s “War Horse,” based on Michael Morpurgo’s award-winning book and nominated for six Academy Awards® including Best Picture, and “The Help,” which resonated with audiences around the country and earned over $200 million at the box office and received four Academy Award® nominations with Octavia Spencer winning for Best Supporting Actress. Upcoming films include the comedy “Delivery Man,” starring Vince Vaughn and car racing actioner “Need for Speed,” starring Aaron Paul.

Participant (participantmedia.com) is a global entertainment company founded in 2004 by Jeff Skoll to focus on feature film, television, publishing and digital content that inspires social change. Participant’s more than 40 films include “Good Night, and Good Luck,” “Syriana,” “An Inconvenient Truth,” “Food, Inc.,” “Waiting for ‘Superman’,” “The Help,” “Contagion” and “Lincoln.” Through its films, social action campaigns, digital network TakePart.com and Pivot, its new television network for Millennials, Participant seeks to entertain, encourage and empower every individual to take action

DreamWorks Pictures’ THE HUNDRED-FOOT JOURNEY – What Bite Takes You Home?