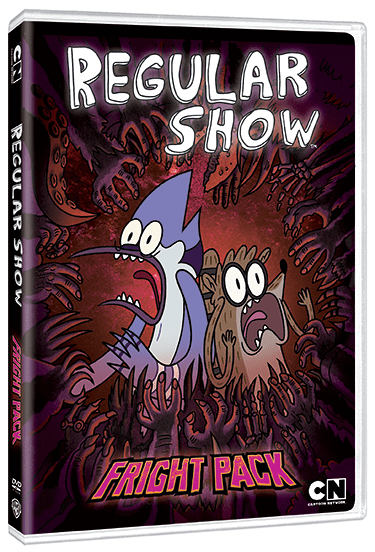 Cartoon Network Releases Its Most Terror-ific DVD of The Year,Regular Show: Fright Pack

Cartoon Network’s Emmy® Award-winning hit animated comedy series Regular Show is back with its fifth and most frightening DVD ever, just in time for Halloween! The Regular Show: Fright Pack DVD, availableSeptember 3, 2013, features “Terror Tales of the Park II,” the 2-part Halloween special as its lead episode, wherein Mordecai, Rigby, Margaret and Benson tell scary stories on their way to a Halloween party. Also included on the DVD are 12 other hilarious episodes from the first four seasons of the top-rated show created by J.G. Quintel. Along with a character gallery bonus feature, Regular Show: Fright Pack will be available for the suggested retail price of $19.82 and features the following episodes:

Regular Show: Fright Pack is the latest addition to the show’s growing home entertainment franchise from Cartoon Network, which includes top-selling episodic DVDs Regular Show: Slack Pack, Regular Show: The Best DVD In The World.* At This Moment In Time and Regular Show: Party Pack, not to mention the recently-released

Regular Show: The Complete First and Second Seasons Blu-ray and DVD release, which is bursting at the seams with bonus features.

An original animated comedy series from creator Quintel and Cartoon Network Studios, Regular Showfeatures best friends Mordecai (a six-foot-tall blue jay) and Rigby (a hyperactive raccoon). The two are groundskeepers at a park owned by Pops, a humanoid-looking lollipop who has spent his entire life there. The job is so deadly dull that the two friends will do anything they can to avoid it. This doesn’t go over well with their boss Benson (an anthropomorphic gumball machine) — but their efforts often result in insane escapades that delight Pops. The series recently won a 2012 Primetime Emmy® Award for Outstanding Short-format Animated Program as well as a 2012 Ottawa Intl. Animation Festival Best Television Animation Made for Children. In addition, the series was nominated for a BAFTA (British Academy of Film and Television Arts) Award for Best Television Series (Kids).

New episodes of Regular Show premiere Mondays at 8 p.m. ET/PT on Cartoon Network with multiple replays throughout the week. Additionally, the Regular Show consumer products program continues to grow and create excitement for fans everywhere, led by a master toy line from Jazwares currently available exclusively at Toys”R”Us retailers nationwide, as well as a full line of apparel and accessories for both kids and adults. A first-of-its-kind Regular Show Nintendo 3DS game Regular Show: Mordecai and Rigby in 8-Bit Land will be released this fall, just in time for the series’ season five premiere on Cartoon Network.

Cartoon Network will support the release of Regular Show: Fright Pack DVD with a kid-focused marketing campaign utilizing broadcast advertising on Cartoon Network, as well as a comprehensive online campaign featured on CartoonNetwork.com and other kid-targeted websites.

Cartoon Network Enterprises (CNE) is responsible for building consumer products and merchandising programs for a wide range of brands by securing and supporting long-term licensing partnerships across all categories. As the global branding and merchandising arm of Cartoon Network and Adult Swim, the division manages the consumer product programs for the networks’ award-winning original programming, brands and characters including Ben 10, Generator Rex, Chowder, The Marvelous Misadventures of Flapjack, Adventure Time, Adult Swim and more. CNE also serves as the exclusive global licensing agent for the full portfolio of brands from Spin Master Ltd., as well as Nelvana Enterprises and Spin Master for the award-winning Bakugan brand and the PGA of America for the youth marketplace.

Cartoon Network (CartoonNetwork.com) is the #1 U.S. television network among boys 6-11. Currently seen in 99 million U.S. homes and 168 countries around the world, Cartoon Network is Turner Broadcasting System, Inc.’s ad-supported cable service now available in HD offering the best in original, acquired and classic entertainment for kids and families. In addition to Emmy-winning original programming and industry-leading digital apps and online games, Cartoon Network embraces key social issues affecting families with solution-oriented initiatives such as Stop Bullying: Speak Up and the Move It Movement.

Turner Broadcasting System, Inc., a Time Warner company, creates and programs branded news, entertainment, animation and young adult media environments on television and other platforms for consumers around the world.