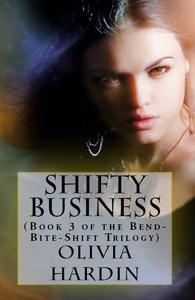 Gerry was in the same position: still as death. She looked even paler and thinner. It was as if the
life were oozing out of her body drop by drop. He placed his hand upon her forehead, feeling the cold
clamminess of her skin under his fingers. It had been a few days, and her brown hair felt dirty and oily
as he rubbed it away from her face. He had the urge to carry her to the bathroom and give her a full
shower.

His eye caught something glittering at her neck and he slipped his finger under the collar of her
dress to feel a string of beads. At the end of the strand was a large silver cross, not a cross actually, a
crucifix. He snorted in derision.

“Got that egg, boyo?” Mére spoke in her high-pitched voice, though the sound was slightly
hoarse from sleep.

“Where the hell did this come from?” he demanded, clenching his hand around the beads.

“Come on, you know she’s a believer. Or at least she was at one time, and true believers never
stop. They just become dormant, so to speak.”

With a heavy breath, he turned to the black woman and nodded. “Yes, the egg’s in the kitchen.
She gave me a funny face, so I made her get me another one. I hope it’s right.”

He heard her rummaging in the kitchen. She reentered the room carrying the egg casually in a
single hand, swinging that arm from side-to-side. He grimaced, recalling how careful he walked all the
way back to the apartment with it tucked protectively in his palm.

“‘Tis now the very witching time of night, When churchyards yawn and hell itself breathes out
Contagion to this world.’” She quoted then chortled with laughter as she winked at him.

“What the hell does that mean? What contagion? She has an infection?” Nicky demanded,
clasping Gerry’s limp hand and rising from the bed.

“Ahahahah! I thought you were more up to date on your Shakespeare, my boy. Now, let’s
see what we have here.” As she spoke, Mére rolled the blankets to Gerry’s waist and raised the still
woman’s clothing so that her bare stomach showed.

Nicky settled back onto the edge of the bed and watched as the voodoo woman placed the egg
onto his wife’s stomach and then rolled it around like she was kneading dough into a ball. The same
French-like incantations emitted from the woman’s lips as she moved the brown egg round and round
in circles. After just a few minutes, she scooped up the egg, slipped the blood-red scarf from around her
head and carefully folded it within the silky folds.