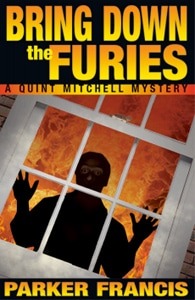 Mystery, suspense, add some arson and a great plot and you will be right in the midst of Bringing Down the Furies. If you enjoy a book that keeps you guessing until the very end, this is one you will want to read!

Quint Mitchell is an excellent private investigator and goes to South Carolina for  one case. This in turn puts him in the middle of two. Although this is not the first in the series (and I have not read the first one, as I did not have enough time), I had no problem with following along. The plot and characters are engaging and with all of the things you might expect from a mystery/thriller you may want to make sure this is adult material! With that being said; if you love a great mystery and a wonderful writer; take time and read Parker Francis’s “Bring Down the Furies”!

Information on the author:

Purchase Bring Down The Furies on Amazon.

Parker Francis is the pen name of author Victor DiGenti. As Parker, I write gritty, fast-paced mysteries filled with murder, violence and laced with humor. The first in my Quint Mitchell Mystery series was MATANZAS BAY, an award-winning adventure set in the nation’s oldest city. The second in the series, BRING DOWN THE FURIES, takes PI Mitchell to Allendale, SC where he becomes embroiled in an ugly cultural war and comes face to face with a serial arsonist.

In my first life I worked for the Public Broadcasting stations in NE Florida with diverse duties that included public affairs producer, director, reporter, fundraiser and producer of the Jacksonville Jazz Festival. My first three books were written using my real name. They were adventure/fantasies with a feline protagonist. The WINDRUSHER trilogy won multiple awards and attracted readers of all ages.

Parker (aka Vic) lives in NE Florida with his wife and their rescued cats who tolerate them as long as their bowls are filled and litter boxes emptied.