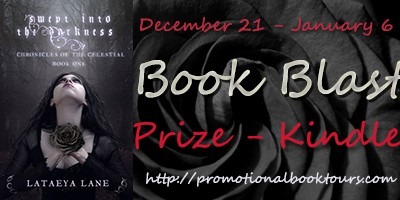 Swept into the Darkness (Chronicles of the Celestial)

Sydney London is no ordinary twenty-four year old. Ever since she was a child she has had unique out of this world abilities. Suffering from a near-death experience and surviving a deadly car crash Sydney is no stranger to death and loss. Cut off from the world around her she encounters an Angel and eventually falls for him inspired by deceitful magic.

Her one true love awaits in the shadows attempting to guard and protect her by risking his immortality. Traumatized by the murder of her best friend she sets off on an unspeakable journey to bring the dead back to life. Sydney’s journey of self-discovery opens her up to learn of her true angelic identity. She is led in the middle of an inter-dimensional war among a hybrid breed of Angel Vampires and the Hierarchy of the Angelic clan. Will her unique powers and the love she bears for her guardian be enough for her to save the Earthly Realm or will she be Swept into the Darkness?

Years of exposure within the writing and publishing world have made a lasting impact on Author LaTaeya Lane. Writing since she was seven years old, Lane began jotting down phrases and themes later turning them into poems and short stories. Writing became such a passion throughout her youth that she became the Junior and Senior editor of her High school newspaper. She wrote her first novel at age sixteen but was not seeking publication at that time in her life. Lane entered several creative writing contests during her early years of writing and won a few of them. Always captivated by the supernatural and elements of fantasy, Lane was inspired to write a series of books that focused on going beyond the boundaries of life and imagination. The angel vampire fantasy “Swept into the Darkness” is Lane’s first published book in a series called “Chronicles of the Celestial.” Lane completed a degree in social Sciences and currently works to support the education of special needs middle school students. Lane resides in the state of New Jersey with her husband Leo and is working on writing a publishing the second book in the series.