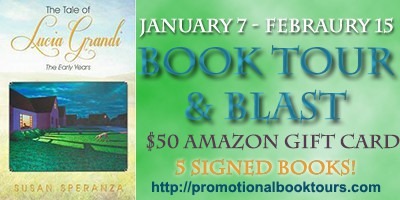 The Tale of Lucia Grandi

When an old woman is asked to tell the story of her life, she tells an intense and poignant tale about growing up in and surviving a warring suburban family during the 1950s and ’60s.

Written as a memoir, each chapter describes a particular incident in Lucia’s life which shows the constant struggle between her parents and the perverse effect it has on her and her family. From her complicated and unwanted birth, to her witnessing a suicide at age 3, to her stint as a runaway at age 14, the story progresses to the final crisis where as a young woman she is turned out of her house and banished from her family forever.

Told in breathtakingly beautiful prose, this is a powerful and timeless story of a dying woman’s courageous attempt to come to terms with her past and the troubled family that dominated it.

ONCE UPON A TIME…

In order to keep me sane through all the craziness of life, I spent my spare time writing. Anything and everything. The culmination of this was a fantasy – The City of Light – which has recently been reissued as an ebook.

I took up the hobby of dog showing and breeding and produced many Pekingese Champions. You can see them over at our Castlerigg Pekingese website.

Somewhere in the middle of my life so far, after a great personal upheaval, I went back to school, became a High School Librarian. I managed to fulfill my childhood dream of living in the country when I finally escaped suburbia and moved to Vermont where I now happily live with my beautiful Pekes.

My biography (as with my life, I hope) is to be continued…