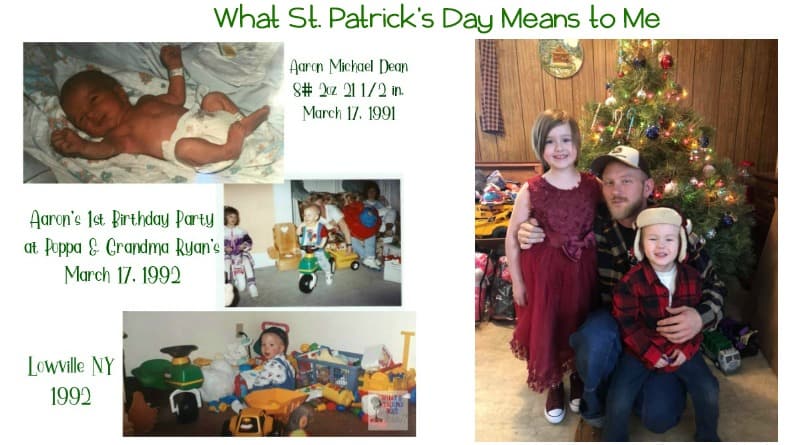 Disclosure:  This post has been brought to you in partnership with Catholic Central.

He is my first child, the one that made me a Mommy.  It is hard to believe that he will be 28 years old this year on St. Patrick’s Day.  Where have all of those years gone? I know since he was my first and he came without an instruction booklet that I made many mistakes along the way.  I blame it on the lack of a manual on how to raise your first child.  But I will say I did something right as he grew into an adult and now has his own little family. He is a very loving Daddy, and when I see him look at his kids I can see the love in his eyes.

I have pictures to share from times during his life, and obviously, I have many more but these seemed to sum up great memories I have of him. 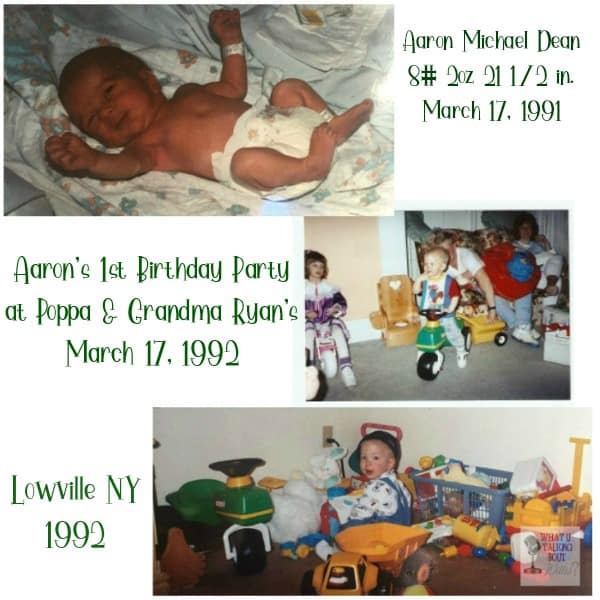 Aaron was such a funny little boy.  He always seemed to be into something.  From the time, he put my only set of car keys down a pipe in our laundry room that had no use.  Or the time I was in the shower and I heard this far, far away voice saying “Mommy, Mommy”.  Although I had locked the door, he had gotten out in his footed sleeper and was stuck to the ice on our sidewalk.  That is when we had to put a hook and eye latch way up high.  The time he poured the biggest box of Cheerios all over the kitchen floor with his cousin who is 11 months older.  I don’t remember getting mad, so much so I still have this picture of him and Kaylin. 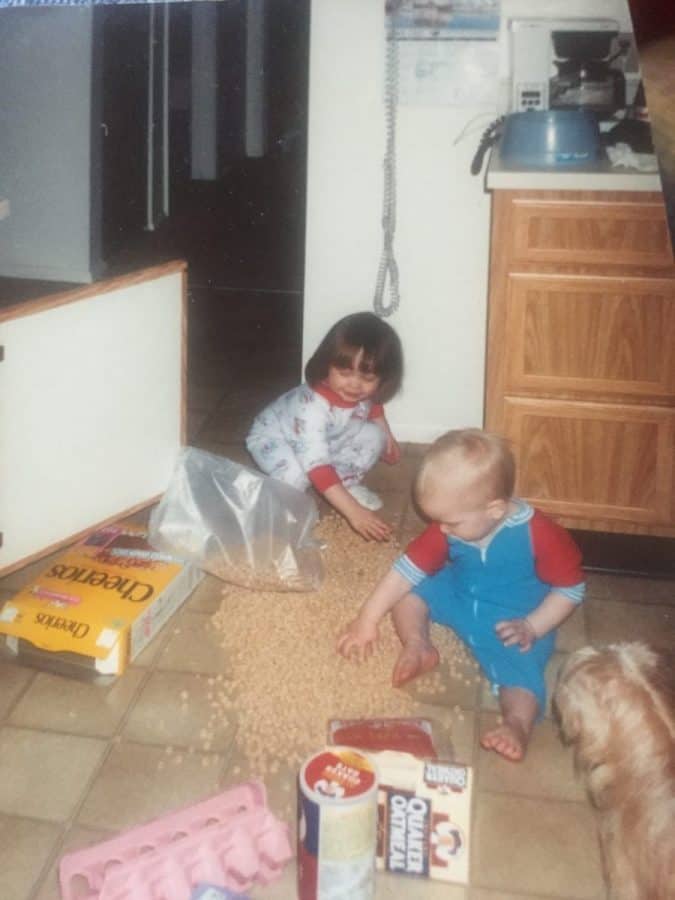 At this time he could crawl out of his crib so I guess they decided to make an early morning of it.  Below is my most favorite picture of Aaron and me. 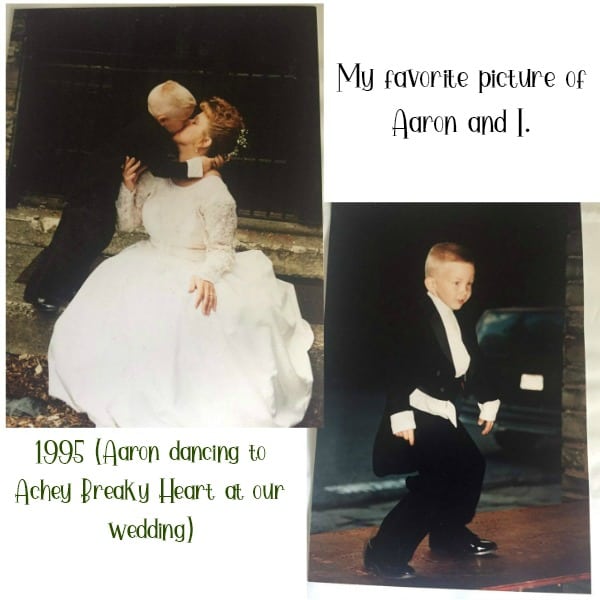 Then there was the time he felt he could get up to the VCR at my parent’s house and ended up having the TV and tall TV stand over on himself. Or the time he locked the babysitter in the bathroom, (I don’t remember how he did that and he was not quite 5).  Then there was the time he took 2 q-tips and stuck them in each ear so he could look like Frankenstein, then he got to jumping on the couch while I was changing a diaper and he punctured his eardrum. That is all I will share on that, as the more I write the more I wondered how he made it past 5 years old.

The picture above is one of my most favorites.  I can still almost remember just how tight he hugged me, and just how hard he kissed me.  I kind of get choked up each time I think about it.  Then to the right, he is dancing on the table at the end of our reception (Roger’s and mine) to Billy Ray Cyrus’s: Achey Breaky Heart.  He just loved that song, as well as Brooks & Dunn’s ‘Hard Working Man’.  He still has some great moves to this day.

Ok, I know, I skipped like his whole high school years.  I almost think he would have liked to himself.  He enjoyed Gym class and his Sports.  Otherwise, he could have cared less.  I was however very proud of him when he graduated.  He wasn’t sure what he was going to do after so he took a year off and worked.  Then he made a huge decision and went into the USMC.  I think I cried more during that first few months when he was in Boot.  Then after his SOI he was stationed in Hawaii for all 4 of his years.  The best part that came out of that I will share with you a little way down. 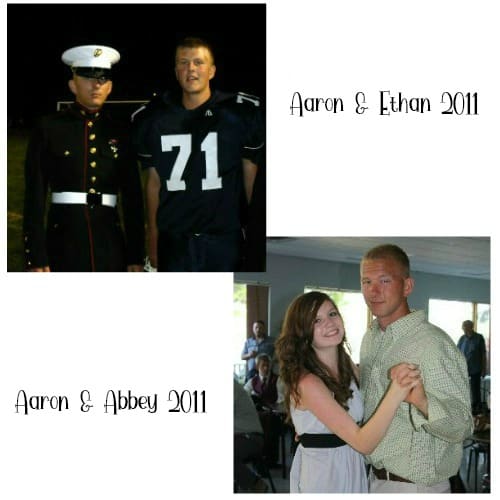 Aaron also made me a Grandma first.  First to Emma who is now 8 years old and in the 3rd grade, and Zakary who will be 4 in early April and is in Pre-school. 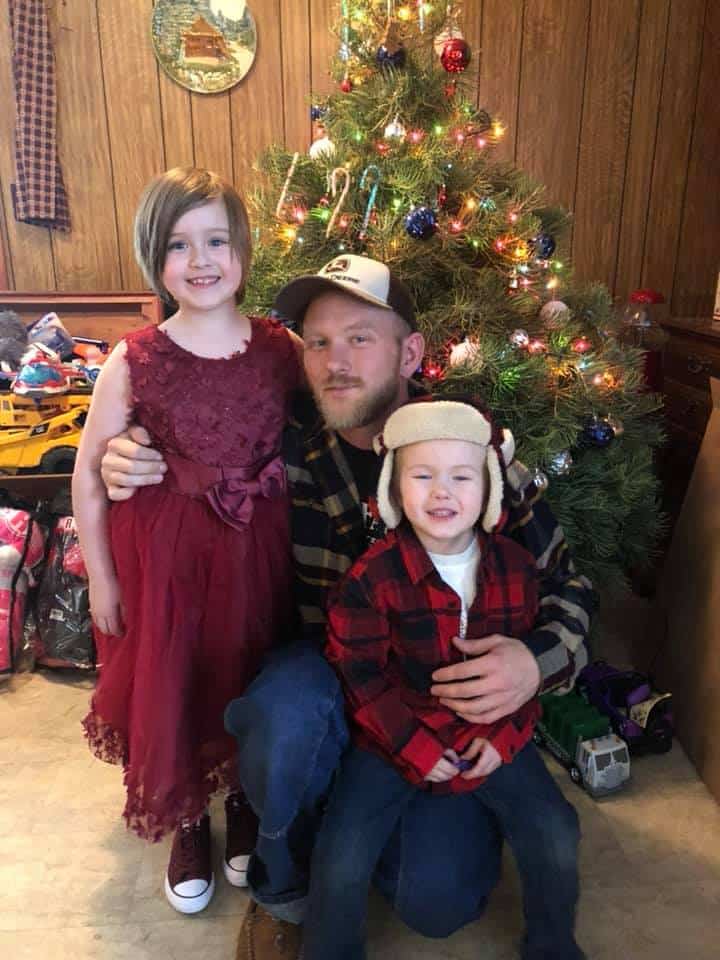 Now we are up to most recent (picture wise) of this wonderful little family.  I am thankful for Aaron with all of my heart.  We are so different and yet so much alike in our love for each other.  He makes me proud to be his Mom and I love watching him be a father to his own children now.

And before anyone asks….yes I am old enough to have a 28-year-old son! lol.  He is my St. Patrick’s Day every year for now going on 28 years.  I couldn’t ask for a better reason to celebrate it every year.

I had to also share my best friend, Heidi from Life with Heidi also has a St. Patrick’s Day child. I thought that was so neat when we were getting to know one another.  You can read her post here:

5 WAYS TO HAVE A SHAMROCKIN’ ST. PATRICK’S DAY

Catholic Central has partnered with me to hold a Saint Patrick’s Day Giveaway which you can see here.