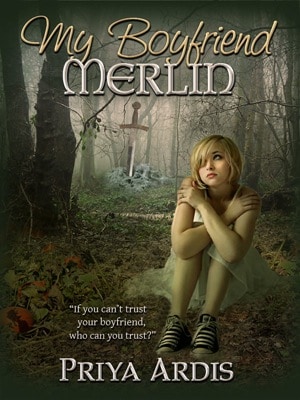 Cover Reveal for the “My Merlin Series” Ever My Merlin coming this Fall!

He was a little older than he was letting on. By a few eons…
In this modern day teen Arthurian, 17 year-old Boston high schooler Arriane, aka Ryan, DuLac just found out the guy she’s been crushing on, hot biker Matt, is a little older than he was letting on. In fact, he is really Merlin—the Merlin, King Arthur’s Merlin, the greatest wizard who ever lived. Frozen in a cave for over fifteen hundred years, he’s woken for a purpose. But Ryan’s not impressed. Tired of being a relationship loser, she’d rather kick his legendary behind.
Sure, the world has been crazy ever since the sword and the stone fell out of the sky like a meteor. But despite gruesome gargoyles, a deadly new world of magic, and the guy driving her crazy, Ryan knows that family is everything. Will Merlin sacrifice hers to save the world? Will she be able to stop him?
Purchase on Amazon / Barnes and Noble

If you haven’t broken the rules, have you really lived?

Two wizard brothers. One sword. One chance to make a difference.
In this modern day teen Arthurian, Excalibur has been pulled from the stone, but what does it mean? 17 year-old Arriane (aka Ryan) DuLac has bigger problems—as student president, she’s got to put on the Prom. While the Wizard Council debates their next move, she leaves the craziness behind and heads home. But she can’t hide forever. Sooner than she’d like Merlin (aka Matt) has her chasing mermaids on the trail of the Fisher King. The wounded king defeated by Merlin’s brother, Vane, in the past holds the key to save the future.
At a time of shifting alliances, she must decide whose side she’s on—the brother who struggles to do right or the brother who dares to break the rules? And Ryan must decide who she is—a regular girl or a champion? One wrong decision and her family falls apart. One wrong decision and the world falls apart. No pressure.

Purchase of Amazon / Barnes and Noble

Priya Ardis loves books of all kinds—but especially the gooey ones that make your nose leak and let your latte go cold. She started her first book at sixteen, writing in notebooks on long train rides during a hot summer vacation in India. Her favorite Arthurian piece is the poem The Lady of Shalott by Lord Alfred Tennyson. A hopeless romantic, she’s a longtime member of the Romance Writers of America. When not living in her characters’ world, she might be found at the local coffee shop—her nose buried in a book.