Disclosure:  I received a copy of Toy Story 4 in order to facilitate my review. All opinions are my own.

We have always been a fan of Toy Story movies.  When the first one came out in November of 1995 our oldest was 4 and our second son was 1 1/2 years old.  They watched the movie all of the time and it became a favorite in our household.  Woody was the favorite of our oldest and Buzz Lightyear was the favorite of our 2nd oldest (or youngest at the time).  With each new movie that came out the kids were always excited.

Now our grandchildren are so happy that Toy Story 4 has came out and they get to finally see Forky.  It is amazing how a movie can have their first one come out in 1995 and their most recent one come out 24 years later.

Join the gang and the new characters for all of the excitement.  You will see how Woody helps a new character in a different way than he has helped his kids in the past (Andy and Bonnie).  He (Woody) has always known how to take care of Andy or Bonnie in the past Toy Storys.  In Toy Story 4 he learns how to help Forky enjoy being a toy and not just a project.  Make sure you get your copy on digital OR order from Amazon the Blu-ray Combination Pack.

You can download the Forky Pumpkin Carving Stencil Below for your pumpkin carving festivities: Download Here or right-click and save to your computer. 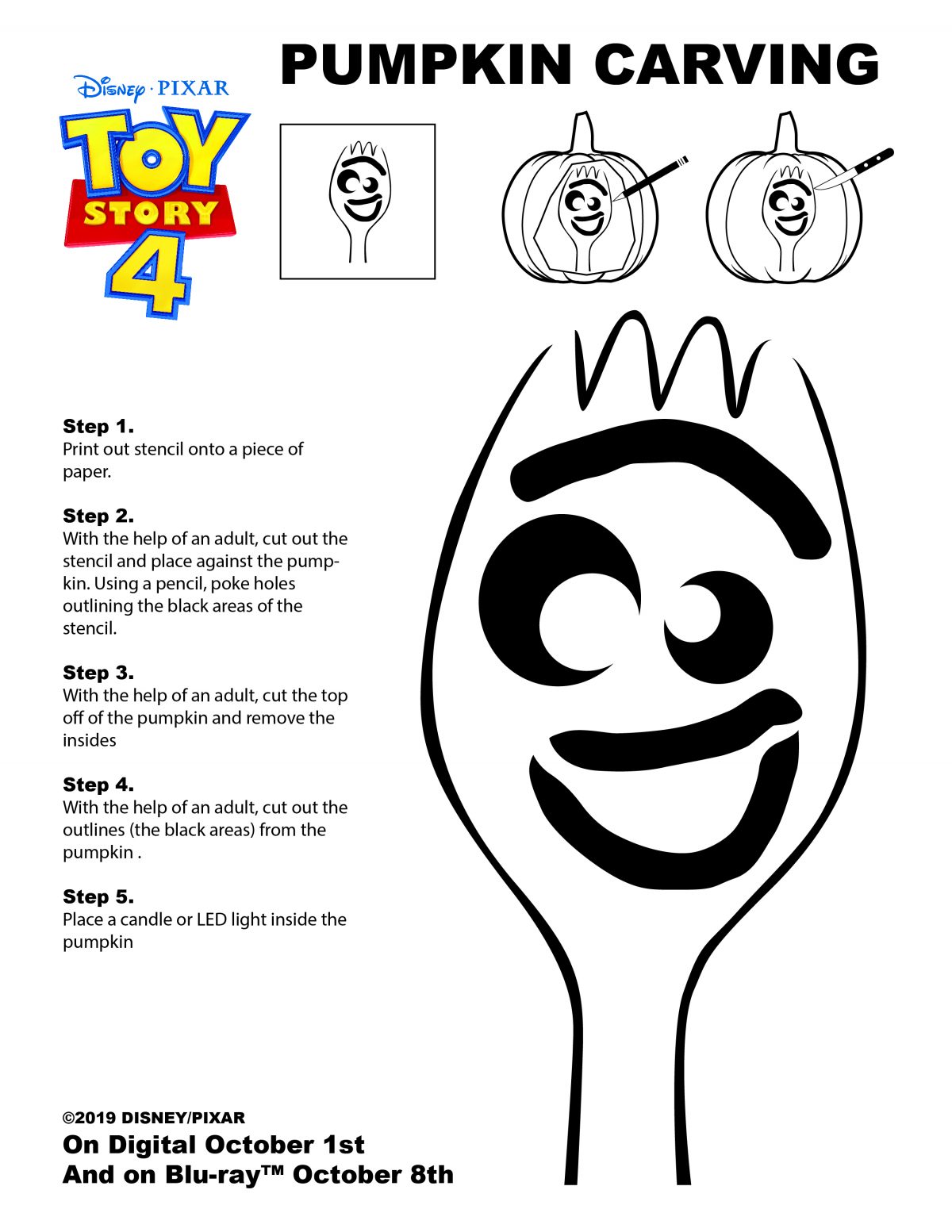 Extras include all-new deleted scenes, conversations with the talent and filmmakers sharing the most memorable moments and characters and much more!

BURBANK, Calif. (August 22, 2019) — This summer, Disney and Pixar’s “Toy Story 4” took audiences on a hilarious and heartwarming road trip with Woody, Buzz Lightyear and the whole gang, earning a 98 percent critics rating on Rotten Tomatoes and more than $1 billion at the global box office. Packed with old friends and new faces, the fourth film in the beloved Toy Story series, which leads Woody to an unexpected fork in the road, arrives home on Digital in 4K Ultra HD™, HD, and Movies Anywhere Oct. 1, and on 4K Ultra HD™, Blu-ray,™ DVD Oct. 8.

Fans who bring home “Toy Story 4” will be treated to over an hour of bonus features celebrating the film’s iconic characters, Pixar’s filmmaking team and the legacy of “Toy Story,” which began as the world’s first fully computer-animated feature film released nearly 25 years ago. Extensive extras includes deleted scenes such as an alternate ending, an all-new featurette with an endearing look back on Woody and Buzz’s legendary friendship throughout the years; entertaining studio stories shared by members of the Pixar team; a nostalgic look back at the creation and first storyboard screening of “Toy Story” with filmmakers; and the pioneering efforts of Pixar artists who created the sets, characters, look and feel of the original film and much more.

In “Toy Story 4,” Woody (voice of Tom Hanks) has always been confident about his place in the world, and that his priority is taking care of his kid, whether that’s Andy or Bonnie. So, when Bonnie’s beloved new craft-project-turned-toy Forky (voice of Tony Hale) calls himself “trash,” Woody decides to teach Forky how to embrace being a toy. But a road-trip adventure, including an unexpected reunion with his long-lost friend Bo Peep (voice of Annie Potts), shows Woody how big the world can be for a toy. In addition, carnival prizes Ducky (voice of Keegan-Michael Key) and Bunny (voice of Jordan Peele) bring a new level of fun to the film.

The must-own, fourth installment in the Toy Story series will be packaged in several ways to ensure families get the most out of their in-home entertainment experience. “Toy Story 4” arrives home a week early on Digital 4K Ultra HD™, HD and SD with two exclusive extras including a deleted scene, “Bonnie’s Playtime”. A physical copy of the film is available as a 4K Ultra HD™ Combo Pack (4K Ultra HD, Blu-ray, and Digital Code), a Multi-Screen Edition (Blu-ray, DVD and Digital Code) and a single DVD. Fans who wish to relive all four Toy Story adventures may opt for a Digital bundle, which is available for pre-order. 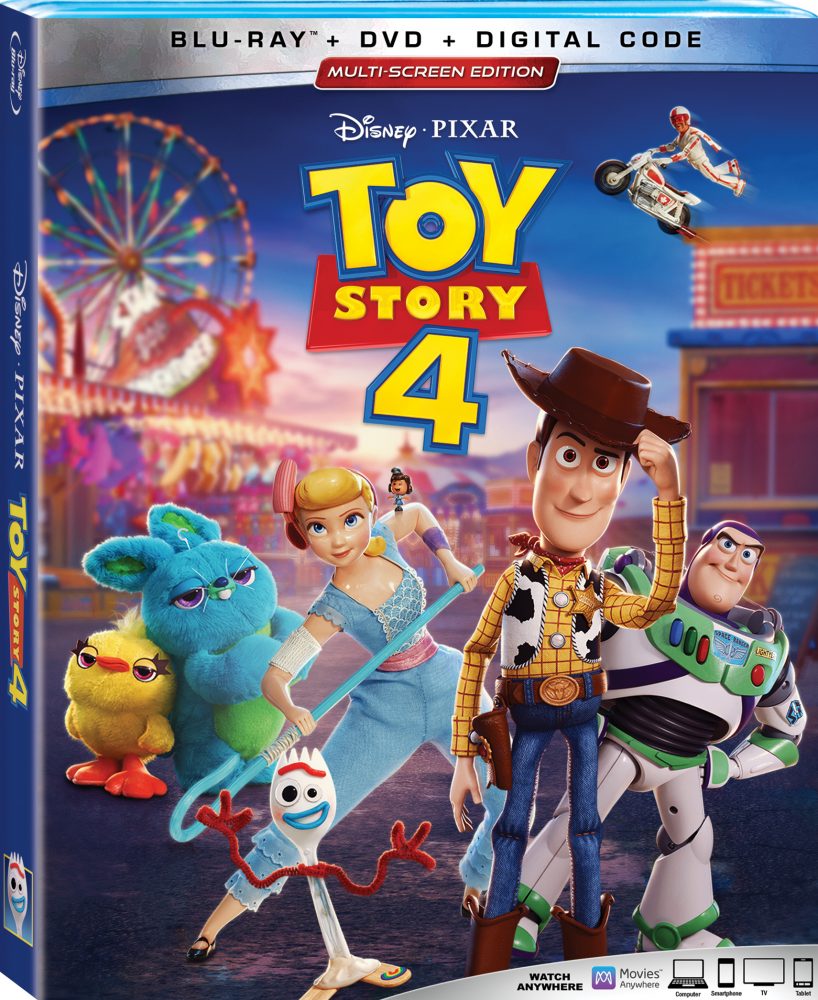 BONUS FEATURES (may vary by retailer)
Blu-ray & Digital:
‘Toy Stories – The Toy Story 4 cast and crew share their love of toys!
Woody & Buzz – Take a look at the relationship between these two legendary characters.
Bo Rebooted – Discover how Team Bo reimagined all aspects of Bo Peep’s identity to arrive at the fully realized character seen in the film.

Toy Box – Enjoy a collection of mini-docs on the film’s memorable new characters, featuring the voice actors, director Josh Cooley and Pixar artists talking about the many elements that make these characters fun and lovable
Let’s Ride With Ally Maki – Ally Maki, the voice of Giggle McDimples, learns all about Pixar’s dialogue recording process from director Josh Cooley and his team.

“Toy Story 4” is directed by Josh Cooley, and produced by Mark Nielsen and Jonas Rivera. Andrew Stanton, Lee Unkrich and Pete Docter are executive producers, and Stanton and Stephany Folsom wrote the screenplay. Longtime “Toy Story” collaborator Randy Newman composed the score and wrote two new original songs, “I Can’t Let You Throw Yourself Away,” performed by Newman, and “The Ballad of the Lonesome Cowboy,” which is performed by Chris Stapleton for the end credits.

ABOUT THE WALT DISNEY STUDIOS:
For over 90 years, The Walt Disney Studios has been the foundation on which The Walt Disney Company was built. Today, the Studio brings quality movies, music and stage plays to consumers throughout the world. Feature films are released under the following banners: Disney, including Walt Disney Animation Studios and Pixar Animation Studios; Disneynature; Marvel Studios; and Lucasfilm. The Disney Music Group encompasses the Walt Disney Records and Hollywood Records labels, as well as Disney Music Publishing. The Disney Theatrical Group produces and licenses live events, including Disney on Broadway, Disney On Ice and Disney Live!.