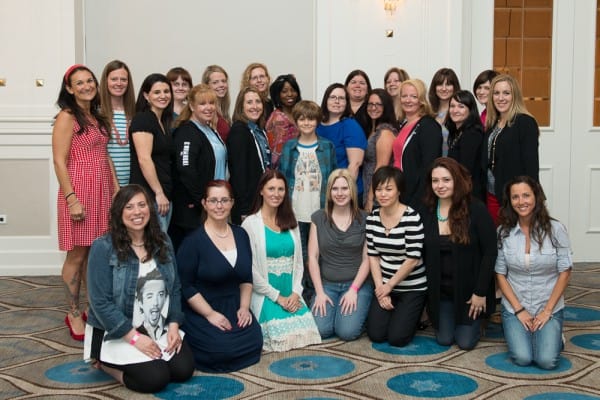 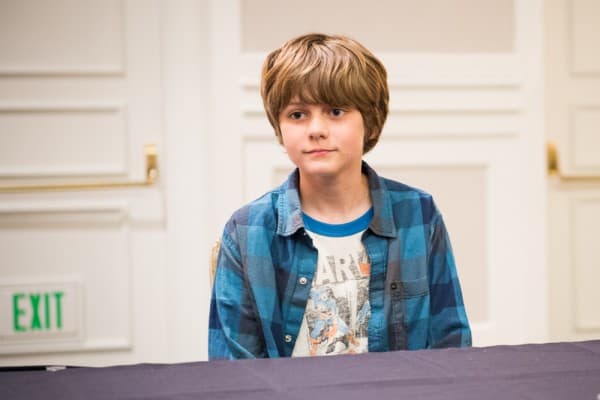 Interview of Ty Simpkins Up and Coming Actor from #IronMan3 #IronMan3Event

While on my trip to LA for the Iron Man 3 Event I had to pleasure of being 1 of 25 bloggers that were able to interview Ty Simpkins from Iron Man 3. He plays the part of Harley in the movie.  This 11 1/2 year old is one to keep an eye out for as this isn’t his first acting job. Ty Simpkins has played many roles already in his young life including Little Woman(2006), Pride and Glory(2008), and Insidious(2010) just to name a few as I could go on and on.

Ty is the youngest of three children and his Mom is his biggest fan.  I really enjoyed Ty’s interview as he was so well spoken and his laugh and excitement was contagious.

Here is our interview questions and Ty’s responses. I loved how he answered the questions repeating the questions as a statement with his answer, just shows you someone has helped him learn a great interview technique!

What’s your favorite aspect of your character?

Have you always been a fan of Marvel movies?

Yes, I have. I love the Marvel movies.

Do you have a favorite hero?

His answer did not surprise me:

Iron Man. I mean it– it’s been my dream.

How does it feel to be working with Robert?

Oh, it’s awesome. Like literally Robert Downey Jr. is my favorite person.  –To which Ty then again laughs-he had such a great laugh.

How did you get into acting?

So I’ve been acting since I was born. I was still in my mom’s stomach when the people called and asked me to be on this– I think it was like at– it was either a TV show or a soap opera. I’m not sure. But they asked me. And then– uh, they didn’t ask me. They asked my mom. And she said I’m not born yet. But and then they said we’ll wait. So–

When asked if he  “Would you recommend this career?” Ty responded in such an adult manner.

Well, it really just depends on opinion. But personally I would– I would suggest acting.

How did you get the part?

Then we hadn’t heard for a while. We got a callback.  I was like, oh, okay, cool, cool. This is awesome. I can’t believe I got a callback. So we went to the call back. The producers and the directors were there. We went through the scene only with one more scene. That was a bit more difficult to learn because it was longer. It was a giant monologue– like paragraph.

Then we hadn’t heard for an even longer time. Then our agent said that we got a chemistry read with Robert Downey Jr.  I was really excited for that. Then we flew out there to North Carolina where we filmed the movie. And we– we flew out to North Carolina. I was looking around. I was like where– where– where is Robert Downey Jr. I couldn’t find him. Then they were just introducing me to everyone. Then there was a guy with a hat and glasses. I just completely looked past him,and then the lady that was introducing me to everyone said and you know who this is. The guy took off the hat and the glasses, and it was Robert Downey Jr. I mean it was a really disguise. I don’t know how I missed it. [insert laughter]

Were you nervous when you met him?

He actually asked me that.  I said, no, I’m just really excited to meet you. 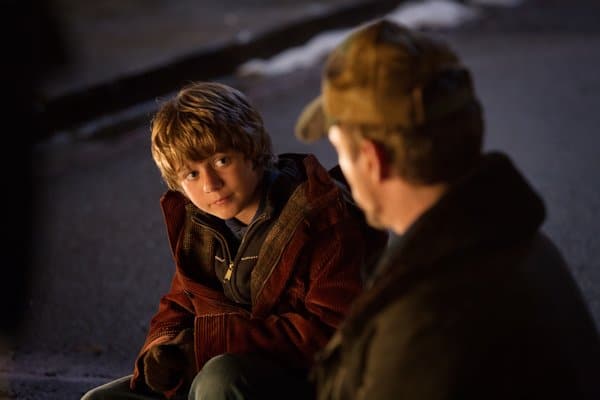 What was your biggest challenge during filming?

Um, one line kept getting like annoying. And I had to say retro-reflection panels. [insert laughter :)] And it was really hard. And then once the day was over I knew how to say it. That happens a lot.

A great question that I always wonder about child actors “How do you find a healthy life balance?

So like sometimes if we’re still in LA on the breaks we’ll still go back and go to school and stuff.  I’ll see my friends a lot. And then we film. And I have a studio teacher to teach me unless I’m in summer. I still have a studio teacher. But I don’t learn.–I am guess Ty meant although the teacher will still be with him he doesn’t have to do schoolwork during this time. 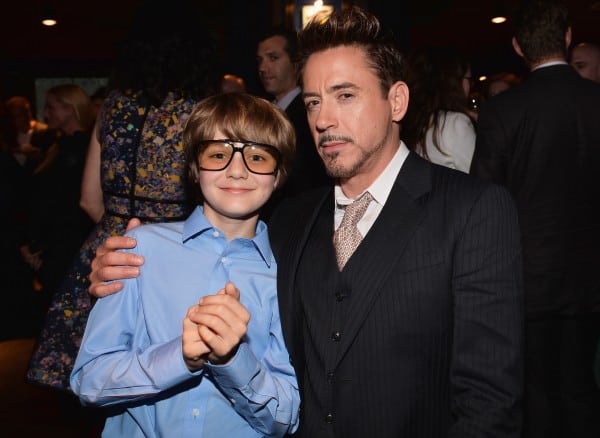 Are your friends excited about you being in Iron Man?

A lot of them are.

When not acting Ty enjoys playing baseball and fencing. He also enjoys making LEGO  Stop Motion Videos (He doesn’t post these videos on You Tube either.)

What’s your next project?

Any funny moments on set?

Me and the other characters, the one where he flies back. Okay, so I was– I had to do this stunt where I’m sitting on a villains lap. Then I blind him with this thing, I jump off of his lap. But so I blind– I took the thing out.I blinded him basically. And he started tipping back with the chair. I couldn’t get off– get, like, I jumped off a little late. Then I feel back with him.

Ty also enjoys doing his own stunts, and  when asked if he enjoyed doing this movie without his sister he replied……

So there is a different dynamic. I feel more kind of focused I guess you could say ’cause my sister is a little rivalry’. But we get along a lot.

I just– like I enjoying filming movies with my sister. But I also enjoy not filming movies. So like it– it’s– it’s good once in a while to like film with your family and other times just to kind of do it with yourself.

Who are your biggest role models?

So there’s Robert Downey Jr., Chris Evans and Johnny Depp. And, that’s it.

Who would you love to work with?

Um, besides Robert Downey Jr. I would love to work with Chris Evans or Johnny Depp.

How should kids prepare for watching this film?

Oh, well, I haven’t seen the movie yet either. Um, it’s gonna be my first time seeing it. But are they my age?  Have they seen other Iron Man movies?  Okay, so,  and other Marvel movies?

Well, I did see the trailer, there is blowing up stuff. But I– I don’t recommend– unless– unless you want to. This is– this is your decision, you can go– like I wouldn’t recommend seeing it in Imax ’cause I see a bunch of stuff in Imax like Jurassic Park 3-D. That was pretty loud. And I’m not a big fan of loud. But I did enjoy that.

What’s your favorite genre to film?

Genre? Um, I don’t think I’ve done comedy. I’m not sure. But I– I do like Action Adventure ’cause this– this is just awesome filming in Iron Man, especially when you’re like with the main guy. Then like you’re helping him and stuff. That’s pretty fun.

How did you react to getting the part?

I screamed yes. [insert laughter]  I was really excited, I was at a cello class. It kind of just made it even better, cello even better.

What’s your all time favorite movie?

My all time favorite movie? The Avengers.

What’s your favorite way to pass time on set?

Oh, well, it depends. Like if I’m in summer I usually hang out with like the studio teacher, like the one that was on this set was pretty awesome ’cause she had an iPad. She had educational games, which are– that there– there was one really cool called Oregon Trail. They made a modified version. And that’s just really awesome. to which we all laughed. –My kids also loved Oregon Trail.

Well, I would like to continue acting. But in acting you have these like sports teams. I would like to like join one of the sports teams for the role– like for the movie and like play against another movie so-called, you can say. It’s really fun ’cause my sister was in a– wait, no, no, no, so I filmed, um, uh, Little Children with Patrick Wilson. And he had this baseball game, uh, softball– softball game. It was really cool ’cause I got to see them play.  I thought I– I could do this when I’m older. I– I want to join one the team– the sports teams. So I want to join them. That was a Broadway show, okay, in New York City.

But me and my sister kind of like– we fought over who was the bat person, like the batboy.  I was like I’m the bat boy. No, I’m the bat boy. Then we kind of had a like an argument about that every time.

Ty also let us know that he has done improv but no stage acting at this time. Then Ty was graciously took a group photo with us and then he was off to get ready for the Red Carpet. He also tweeted about us after he left…or maybe it was his Mom; either way that was neat.

I really enjoyed as I mentioned earlier our time with Ty Simpkins, and he was so cute on the Red Carpet. 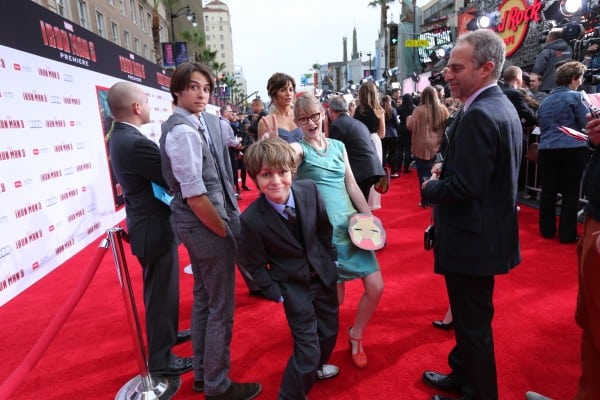