When thinking of holiday gift ideas; do not forget to include these awesome titles from young to old. Disney has something for everyone. With all the newest DVD selections that have or are going to come out in 2013; you are sure to please more than 1 person in your family.

**links may contain affiliate links, otherwise I was not compensated for posting this information**

Marvel Studios’ Iron Man 3 pits brash-but-brilliant industrialist Tony Stark/Iron Man against an enemy whose reach knows no bounds. When Stark finds his personal world destroyed at his enemy’s hands, he embarks on a harrowing quest to find those responsible. This journey, at every turn, will test his mettle. Available on 3D Super Set, Blu-ray Combo Pack, DVD, Digital Copy & On Demand September 24, 2013.

Bonus features include: Deconstructing The Scene – Jump into action with the stunt-teamskydivers in this close-up look at creating one of the movie’s most memorable scenes; Exclusive Behind-The-Scenes Look at Marvel’s Thor: The Dark World;  Marvel’s Iron Man 3 Unmasked—Join cast and crew for a crash course in epic movie-making, Marvel style; Gag Reel; Deleted & Extended Scenes and Audio Commentary with Drew Pearce & Shane Black.

Note: If you would like to see my review of Iron Man 3 (from when I was on the Red Carpet in LA for the Premiere you can click here.)

The timeless story of the Little Mermaid is making its Diamond Edition debut this October.  The Blu-ray contains oceans full of bubbly bonus features including an All-New Music Video by Carly Rae Jepsen singing “Part Of Your World,” featurettes including @ Disney Animation which speaks with current Disney animators who were inspired by the film, a Deleted Character, The Real Little Mermaid: Live Action Reference Model,  Part of Her World: Jodi Benson’s Voyage To New Fantasyland, Howard’s Lecture, Crab-e-okee along to your favorite songs and all the classic DVD bonus features. Availbale on 3-Disc Blu-ray Combo Pack (Blu-ray 3D + Blu-ray + DVD + Digital Copy + Music Download) for $49.99 SRP and 2-Disc Blu-ray Combo Pack with Digital Copy (Blu-ray + DVD/ Digital Copy) for $44.99 SRP. If you would like to read my review on The Little Mermaid: Diamond Edition you can click here.

Ring in the holidays with a new 30th Anniversary Special Edition of Mickey’s Christmas Carol. Disney’s timeless tale sparkles like never before on Blu-ray and Digital Copy, with fully-restored classic holiday shorts, plus all-new bonus features!

Make the season merry as Mickey, Goofy, Donald and all their pals star in a heartwarming retelling of Dickens’ unforgettable holiday tale. Ebenezer Scrooge (Scrooge McDuck) is far too greedy to understand that Christmas is a time for kindness and generosity. But with the guidance of some wise ghosts (Goofy and Jiminy Cricket) and a bunch of newfound friends, Scrooge learns to embrace the spirit of the season. Share this wonderful holiday treat with the whole family! Bonus features include: Mickey’s Christmas Carol, Yodelberg, Pluto’s Christmas Tree, Art of Skiing, Corn Chips, & The Hockey Champ. Available on Blu-ray Combo Pack (BD+DVD+eCopy), DVD (+ eCopy), or Digitally.

Get ready to ring in the season with a full-length adventure straight from the heart of the Hundred Acre Wood. Join Pooh, Tigger, Eeyore, Roo and the whole gang in Winnie The Pooh: A Very Merry Pooh Year – now on Blu-ray™ and Digital Copy for the very first time. Newly re-mastered in digital high definition, this sparkling holiday classic is an inspiring celebration of friendship. It’s the most wonderful time of the year, but Rabbit will only discover the true spirit of the season after his pals make misguided New Year’s resolutions to change – with hilarious and heartfelt results! Featuring beloved characters, delightful songs and fun-filled bonus goodies, this special Gift of Friendship Edition is sure to become a shared family tradition for generations to come! Bonus features include Disney Intermission: press “pause” and see the characters break into song and dance. Available on Blu-ray Combo Pack (BD+DVD+eCopy), DVD (+ eCopy), or Digitally.

Disney’s heartwarming family comedy, PLANES, revved up with high-flying action and adventure, lands in homes and mass retailers nationwide on November 19th.  This endearing underdog story about a crop dusting plane named Dusty with sky-high dreams touches down on Blu-ray, DVD, Digital HD and On-Demand featuring a cargo hold full of exciting bonus features. Guaranteeing hours of fun, PLANES is the perfect gift for “ladies and gentle-planes” of all ages this holiday season. 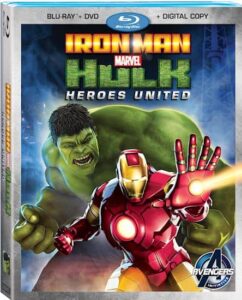 Marvel makes history again with one of the greatest Heroic team ups in the universe. Hulk’s brute strength and Tony Stark’s high-tech intellect come together to create a powerful duo necessary to face off against one of the most dangerous enemies.

When “Zzzax,” a seemingly invincible, energy devouring monster threatens to destroy the planet, these two Avengers are mankind’s only hope. Alone, neither can defeat the awesome power of Zzzax. As a team, they just might have a chance – if they can find a way to work together without smashing heads before time runs out!

Julie Andrews and Dick Van Dyke bring this timeless classic to life for the first time on Blu-ray. Bonus highlights include: “Mary-oke” an interactive segment that allows viewers to sing-along with famous songs from the film, “Becoming Mr. Sherman,” Saving Mr. Banks’ Jason Schwarzman reveals what it was like to take on the shoes of famed Disney musician Richard Sherman and the making of the Broadway musical.

Johnny Depp and Armie Hammer star in The Lone Ranger, from Jerry Bruckheimer Films and Director Gore Verbinski. It’s a wild ride of high velocity action, explosions and gunfights that brings the famed masked legend to life through brand-new eyes. The Lone Ranger (Hammer), the last of his kind, teams with Tonto (Depp), a dark and mysterious vigilante, to seek vengeance after justice has failed them. It’s a runaway train of epic surprises, as these two unlikely heroes must learn to work together before the ultimate showdown between good and evil explodes.

The titles  that are not released yet can be pre-ordered by clicking the links in each section. Give someone the gift of Disney this holiday season!