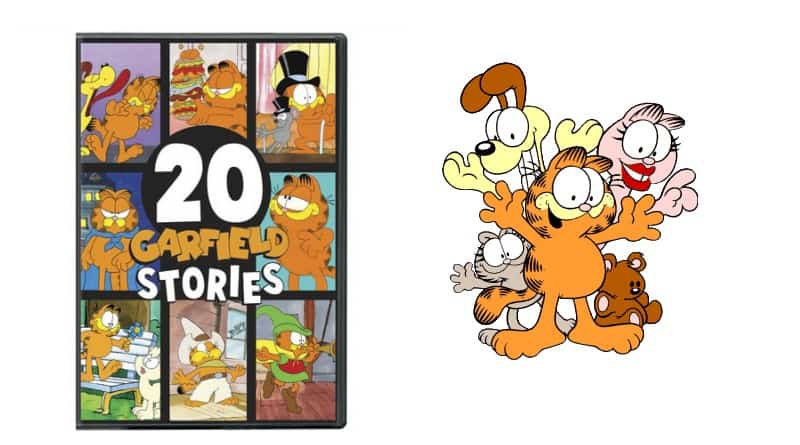 Fans of the furry feline will follow he and his friends as they take viewers on a journey of fairy tales, history lessons, crime solving and more.  Children will follow Garfield on a tour of a movie museum and learn about famous cats in films in Films and Felines. Then, they will hear the real story of the Pied Piper who happened to have a cat, in The Pie-Eyed Piper. Eighteen more fun-filled adventures abound in “GARFIELD: 20 STORIES,” which will be available beginning January 15, 2019, for a suggested retail price of $6.99.  The DVD has a running time of 142 minutes.

A few of the other adorable episodes included on the DVD that children will love are How to Drive a Human Crazy where Garfield lectures kittens on how to drive their owners crazy, The Life and Times of the Lasagna Kid where Garfield sings a ballad about a famous western cat and Clash of the Titans! where Garfield and Odie find themselves caught in a Superhero Cartoon.

“Garfield” is the most widely syndicated comic strip in the world with over 200 million people reading it each day.  The Garfield books have sold over 200 million copies worldwide, and the property is licensed in almost every country with over 5,000 products in the global marketplace.

Other titles available from SkipRope include: “GARFIELD: NINE LIVES,” “ROALD DAHL’S THE BFG,” “KATE & MIM-MIM THE MIMILOO ZOO,” and the double-feature “THE GRUFFALO” and “THE GRUFFALO’S CHILD.”

Public Media Distribution, LLC, is a leading media distributor both domestically and internationally. We offer high-quality, distinctive programs to our customers, including documentaries (The Sixties), dramas (Fortitude), and popular children’s programming under the SkipRope brand (Kate & Mim-Mim) in multiple formats including DVD, Blu-ray, digital download, and digital streaming.

The SkipRope logo is a trademark of Public Media Distribution, LLC