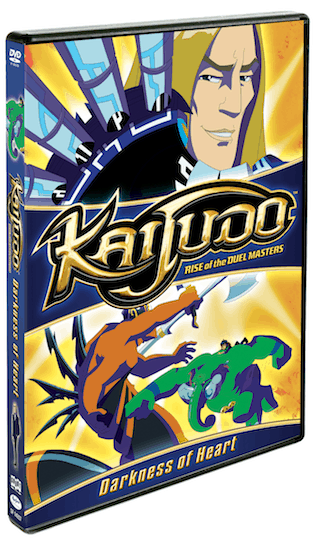 Kaijudo: Rise of the Duel Masters ­ Darkness of Heart on DVD 9/24!!

*Disclosure* I did not receive compensation for this post all information was given to me by ClickComm.

KAIJUDO: Rise of the Duel Masters –

This fall, get ready to watch more extraordinary animated adventures of Ray and the Duel Masters! On September 24th, 2013, Shout! Factory, in collaboration with Hasbro Studios and Wizards of the Coast, will release KAIJUDO: Rise of the Duel Masters –Darkness of Heart on  DVD, featuring five more exciting adventures and an exclusive playable trading card. A must-have for young KAIJUDO duelists, collectors and heroes of all ages, this DVD is priced to own at $14.97 SRP.

When 14-year-old Ray is recruited by the mysterious Duel Masters, he and his friends, Gabe and Allie, find themselves in a dangerous dimension where they must defend themselves – and Earth – from the evil mastermind known as the Choten. In these five exciting new episodes, Ray is temporarily blinded when battling a creature called Shaw K’naw, the kids investigate mysterious creature abductions, and Ray must enter the Darkness Civilization first to rescue Allie’s father…and then to rescue Allie!

Produced by Hasbro Studios and Wizards of the Coast, KAIJUDO: Rise of the Duel Masters: Darkness of Heart  features the voice talent of popular actors Scott Wolf, Freddy Rodriguez, John DiMaggio, Oded Fehr, Phil LaMarr, David Sobolov, Kari Wahlgren and Jason Marsden. This stylish action-fantasy animated series offers an inspiring story about a young hero, Ray, who possesses the rare ability to befriend and duel alongside fantastical creatures from a parallel dimension. It’s up to Ray to master the ancient art of KAIJUDO in order to protect both worlds.

KAIJUDO: Rise of the Duel Masters: Darkness of Heart Episodes

Hasbro Studios is the Los Angeles-based entertainment division of Hasbro, Inc. (NASDAQ: HAS). The studio is responsible for entertainment brand-driven storytelling for the company across television, film, commercial productions and short-form. It develops, produces and distributes TV shows based on Hasbro’s world class brands, including TRANSFORMERS, MY LITTLE PONY, LITTLEST PET SHOP and FAMILY GAME NIGHT. Many of these shows air on Hub Network, a U.S. television network for kids and their families, that is a joint venture between Hasbro and Discovery Communications (NASDAQ: DISCA, DISCB, DISCK). Hasbro Studios shows can also be seen on networks in more than 170 countries globally.  Since its formation in 2009, the studio has received seven Daytime Emmy wins and 16 nominations.  On the film side, the studio is developing and producing a number of features based on Hasbro’s brands, including TRANSFORMERS 4 (Paramount), STRETCH ARMSTRONG (Relativity Media) and CANDY LAND (Sony).  The studio team also oversees the production of commercials that feature Hasbro’s brands as well production of short-form content that can be seen on all of the major digital and social media platforms globally.

About Wizards of the Coast

Wizards of the Coast is a leader in entertaining the lifestyle gamer. Wizards’ players and fans are members of a global community bound together by their love of both digital gaming and in-person play. The company brings to market a range of gaming experiences under powerful brand names such as MAGIC: THE GATHERING, DUNGEONS & DRAGONS, and KAIJUDO. Wizards is also a publisher of fantasy series fiction with numerous New York Times best-sellers. For more information, visit the Wizards of the Coast Web site at www.wizards.com.

Kaijudo and all related logos and character names and their distinctive likenesses TM 2012 Wizards of the Coast/Shogakukan/Mitsui-Kids.

Tags
Rise of the Duel