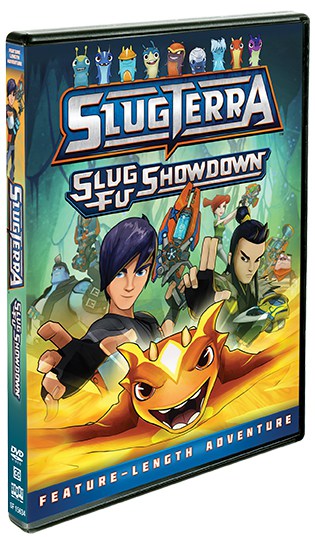 Slugslingers, get ready: it’s time to slug it out with a whole new kind of slugslinging! On February 10, 2015, Shout! Factory, in collaboration with DHX Media, will release Slugterra: Slug Fu Showdown on DVD.  This exciting animated movie also includes a bonus ‘slugisode’, and has a suggested retail price of $14.97. Fans can pre-order their copy by visiting ShoutFactory.com.

In Slug Fu Showdown, Eli has added some awesome new slugs to his arsenal: the ELEMENTALS. But the Elemental Slugs are ancient, extremely powerful, and temperamental, and Eli can’t control them. Junjie, the newest member of the Shane Gang, has the solution: Eli must learn SLUG FU, the ancient and mysterious form of slugslinging that Junjie mastered when he lived in the Eastern Caverns. The Slug Fu training won’t be easy, and it’s something Eli and Junjie must do alone. That means leaving Kord, Trixie and Pronto behind—and all of Eli’s slugs, too! Things get even tougher when Eli’s training is cut short by a mysterious new villain with a seriously insane plan to rock Slugterra to its core. The villain needs only one thing to unleash his evil plan: the Elemental Slugs! Luckily, Eli left them with the rest of the Shane Gang, so they are safe…or they would be, if Pronto hadn’t annoyed them so much that they hopped off and ran away. As Kord, Trixie and Pronto struggle to keep the wily Elementals out of the wrong hands, Eli and Junjie engage in a showdown with the madman before he can reduce the 99 caverns to rubble!

In Slugterra: Slug Fu Showndown  is an epic sci-fi comedy adventure set deep underground, where the ammo’s alive and only the quick survive! In this luminous, high-tech, underground world, every cavern holds a new adventure, a new battle and weird little slugs to be discovered. Slugterra was created by Vancouver-based animation studio Nerd Corps Entertainment, which was recently acquired DHX Media Ltd.

How to Find the Right Talent For Your Independent Film

Nerd Corps Entertainment produces stylistically innovative animated projects for television, online, and mobile based on a solid foundation of creative and exceptional storytelling. Nerd Corps’ expertise in creative development and execution covers all aspects of property generation and management, from development and production to distribution, marketing, interactive and licensing. The studio’s award?winning stable of productions includes original series Kate and Mim-Mim, Endangered Species, Slugterra, Storm Hawks, League of Super Evil and Rated A for Awesome, as well as Dragon Booster for Alliance Atlantis and Hot Wheels: Battle Force 5, Max Steel and Monster High for Mattel, Inc.

Anyone that is a SlugTerra Fan will enjoy SlugTerra Slug Fu Showdown!