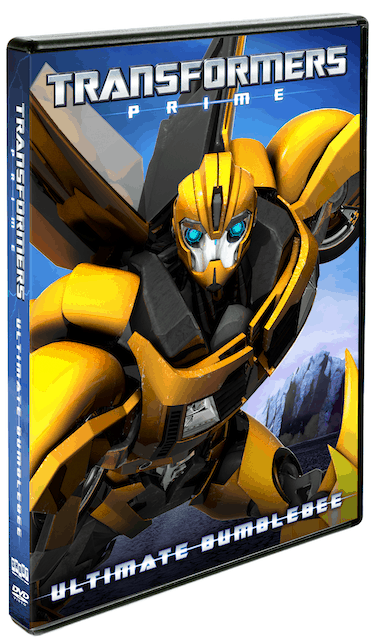 On February 25th, Shout! Factory in collaboration with Hasbro Studios, is set to release Transformers Prime: Ultimate Bumblebee on DVD! This DVD will be available at Wal-mart stores nationwide for $9.99!

Spring into action with BUMBLEBEE from Hasbro Studios’ Emmy® Award-winning series TRANSFORMERS PRIME!  Beloved by kids and legions of fans worldwide, BUMBLEBEE is a dedicated warrior and a scout who serves as part of the elite squad lead by OPTIMUS PRIME. Though he may be one of the smallest and youngest of the TRANSFORMERS, don’t let that fool you. Time and time again, this AUTOBOT proves that he has the bravery to fight for what is right and the tenacity to throw himself into action to battle against his opponents no matter where they appear. On February 25, 2014, Shout! Factory Kids, in collaboration with Hasbro Studios, will release TRANSFORMERS PRIME: ULTIMATE BUMBLEBEE on DVD, featuring a collection of four best BUMBLEBEE adventures from the TRANSFORMERS PRIME lore. Packed with visually stunning CG animation and unforgettable characters, this new DVD delivers fun-filled home entertainment that kids and parents will enjoy! Bring home TRANSFORMERS PRIME: ULTIMATE BUMBLEBEE DVD at an affordable low price of $9.99. SRP.