How does Insurance Work for Roof Replacement?

One of the heavenly muses for art has been significant historic events that impact civilizations at large. That hasn’t changed even now as we expect many canvases to narrate the story of how the current pandemic changed the outlook of the world.

Before this, the plague became the focal point for many masterpieces, each depicting some unknown and undiscovered aspect of it. Even though the plague ended, the art inspired by it still stands through the pangs of time due to its significance.

Even though plague art mostly depicted grotesque repercussions of the diseases in the rawest manner but it had some symbolism. In the wake of the current pandemic, let’s have a look at what lessons the plague art taught us which still stands true.

Death as an Equalizer

The plague ate a huge chunk of the European population as it spread like wildfire. With a minimal way to prevent it and paltry equipment, it brought a lot of people to face to face with death. Most of the plague art has focused on the rampant havoc it has caused to people from all walks of life.

Pieter Bruegel’s “The Triumph of Death” is a wildly famous painting and an accurate description of the plague. It depicts catastrophic scenery where the landscape of a whole town is visible, all up in flames. This piece was close to the themes of the Middle Ages which was of the dance of death. It meant that everyone was eventually meant to join in.

On the barren landscape, people of all races, genders, and stature lay in waste in the face of destruction. This image attempts to reassure the inevitable fate of humankind when encountered with death. Also, it puts death in the light of an equalizer as it kills everyone without any discrimination.

Plague art aside from portraying the collective anguish and tragedy soon took a turn into self-portraits to depict individual and personal stories. This type of art was cathartic for the artists themselves to give them closure as well as express their anguish over the situation. 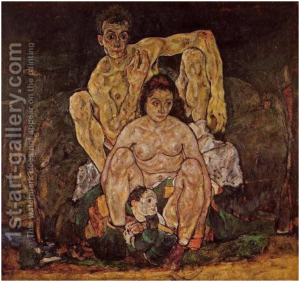 The Family by Egon Schiele was a very unfiltered and real portrayal of the circumstance of the plague and how it affected personal lives. Egon was a brilliant artist who with his family died from the Spanish Flu.

This is the image of Egon, his pregnant wife, and their unborn child who never saw the light of the day due to the rampant flu. The expressions of Egon and his wife reek of hopelessness as his wife seems to be looking to the floor while Egon seems to be conveying his aches, a symptom of the flu. This painting gives us an accurate description of angered people filled by frustration at their inevitable circumstances.

Mainly in the 17th and 18th centuries, artists made artworks to command a sense of solidarity in the population towards the plague-stricken by invoking collective sympathy. This was an important shift in plague art as many were reluctant to help the diseased and such artworks were a medium to appeal to the humanity in people to aid the diseased.

An attempt was put forward to humanize the victims of the plague as people from all spheres of life, from workers to nobles. This would make it more relatable for the masses and encourage them to step forward by aiding their comrades.

Moreover, this type of plague art then found itself in monasteries and churches to inspire people further. This move attempted to glorify those who helped the sick and associate them with Jesus Christ himself, to denote helping them as a Godly act. Those who lost their lives by helping the diseased were given the stature of martyrs.

The Black Death claimed a lot of lives in the nooks and corners of the whole wide world. It wiped out generations of men, women, and children all together which stands a testimony to its strength.

What Do you Say in Credit Card Reconsideration?

The Black Death At Tournai is part of the chronicles of Guilles who rightly depicted people burying the dead in Belgium, Germany. A reduction of settlements from 1, 70,000 to 40,000 was seen in just a century due to the Black Death.

This scenario brought forward the notion of mass burials that happened in Germany. Each of the figures in it seems to be having a sunken face dripping with grief and sorrow. The fact that mass burials became a commonplace thing is all the more saddening.

The face of each mourner has the same emotion so it creates a mutual companionship in this suffering to bind people together at such difficult times. They are all working together to give respectful goodbyes to their loved ones while crammed in a space with everyone.

Plague art clearly seems to depict the raw emotions of grief, anguish, togetherness, and empathy that arise in worldwide health situations like these. Such art forever gives us comfort, invoking a sense of camaraderie that humankind eventually united in the face of such adversity.

Experimenting with Clothes Design: 6 Tips to Get You Started

How does Insurance Work for Roof Replacement?