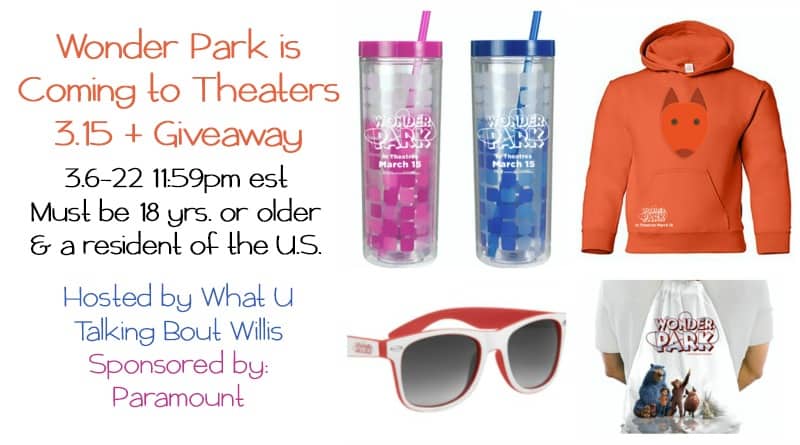 Disclosure: This is a sponsored post written by me on behalf of Review Wire Media for Paramount.

Wonder Park Synopsis Wonder Park tells the story of a magnificent amusement park where the imagination of a wildly creative girl named June comes alive. One magical day, as June is running through the woods to find her way home, she discovers an old rollercoaster car and climbs inside. She suddenly finds herself in Wonderland, an amusement park she had created in her mind and put aside as a passing daydream.

All the rides and characters she imagined are brought to life here, but the park has been falling into disarray since she let her dream slip away. Now, with the help of her fun and lovable park characters, June will have to put the wonder back in Wonderland before it is lost forever.

One reader will receive:

Open to U.S. residents of the 48 contiguous United States. If you have won the same prize on another blog, you will not be eligible to win it again.

Disclosure:
We reserve the right to make revisions, to cancel, or suspend this contest for any reason. We are not associated with any of the companies named above. The odds of winning are based on the number of entries received. This is Open to the US Only and you must be 18 years or older to enter. Confirmed Winner(s) (by Random.org) will be contacted by email. Winner(s) have 24 hours to respond before a new winner is chosen. No purchase necessary. Void where prohibited by law. The sponsor(s) will be responsible for product shipment to winner(s) of this giveaway. What U Talking Bout Willis?(and any other blog participating) is not responsible for product shipment/delivery. This event is in no way administered, sponsored, or endorsed by, or associated with, Facebook and/or Twitter, Google, Pinterest. This disclosure is done in accordance with the Federal Trade Commission 10 CFR, Part 255 Guides Concerning the Use of Endorsements. Entrants must only enter with either one email address, IP address and/or Facebook account, anyone found violating these rules will be disqualified.