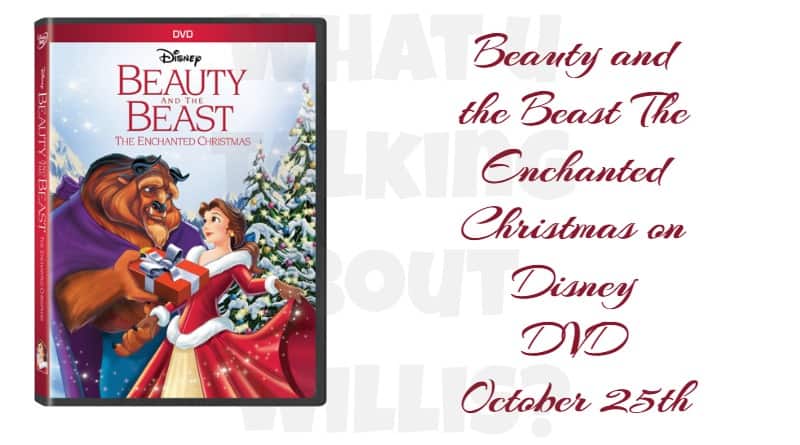 SING Your Way to the Olympics – Watch the TV Spot

Just in time for the 25th anniversary of the original animated classic. The Enchanted Christmas tells a tale set within the story of the original feature, about Belle spreading Christmas cheer within the confines of Beast’s castle during her time there. The film’s all-star voice cast features Robby Benson as Beast and Paige O’Hara as Belle, along with the castle’s enchanted staff including Jerry Orbach as Lumiere, David Ogden Stiers as Cogsworth, Angela Lansbury as Mrs. Potts, Haley Joel Osment as Chip, Bernadette Peters as Angelique and Tim Curry as a grumpy pipe organ who threatens to ruin the holiday festivities.

This holiday movie is packed with laughs, music, beloved characters and heart, Beauty and the Beast The Enchanted Christmas is a must-own for the entire family! Bring home this charming tale as old as time on Disney DVD October 25th!

“Wonderfully enchanting … will live happily ever after with the rest of your holiday favorites!”

In Celebration of the 25th Anniversary of “Beauty and the Beast,”

“BEAUTY AND THE BEAST: THE ENCHANTED CHRISTMAS”

COMES HOME FOR THE HOLIDAYS

Feast on the film’s original musical score and bonus material featuring production secrets and a sing-along!

SYNOPSIS:    The beloved animated classic “Beauty and the Beast” broke ground as the first animated feature film to receive an Academy Award® nomination for best picture and its enchanting story and captivating characters have truly stood the test of time. In celebration of the film’s 25th anniversary and addition to the Walt Disney Signature Collection, the delightful holiday adventure inspired by the timeless tale — this movie– will be released on DVD, Digital HD and Disney Movies Anywhere on Oct. 25.

“Beauty and the Beast: The Enchanted Christmas” reveals a Christmas past when Belle does her best to warm the Beast’s castle with the spirit and hope of the season. The film’s all-star voice cast features Robby Benson as Beast and Paige O’Hara as Belle, along with the castle’s enchanted staff including Jerry Orbach as Lumiere, David Ogden Stiers as Cogsworth, Angela Lansbury as Mrs. Potts, Haley Joel Osment as Chip, Bernadette Peters as Angelique and Tim Curry as a grumpy pipe organ who threatens to ruin the holiday festivities.

The film’s original musical score, composed by Academy Award®-winning film composer Rachel Portman, fully captures the spirit of the season. The holiday cheer carries on through extensive bonus material such as a behind-the-scenes featurette detailing the creation of this holiday heartwarmer, the “As Long as There’s Christmas” music video performed by Play, and a sure-fire family favorite—the movie sing-along!

BEHIND-THE-SCENES FEATURETTE – Step behind the scenes and witness how filmmakers created this irresistible holiday musical adventure — from storyboarding to special effects to the original musical score that lifts holiday spirits.

DISNEY SONG SELECTION – Delight in the spirited songs featured in “Beauty and the Beast: The Enchanted Christmas” and performed by members of the star-studded cast.

SING ALONG WITH THE MOVIE – Grab a microphone – or a hairbrush – and sing along to your favorite songs from “Beauty and the Beast: The Enchanted Christmas.”

“AS LONG AS THERE’S CHRISTMAS” – Check out the music video for the uplifting holiday song, “As Long as There’s Christmas,” performed by Swedish pop group Play.

ENCHANTED ENVIRONMENT – Bring the crackling fireplace from the Beast’s castle into your own home!

DISNEY’S SING ME A STORY WITH BELLE: “STICK TO IT (DON’T GIVE UP)” – Belle shares an inspirational message, encouraging viewers to keep trying and never give up.

Movies that Dealt with the Theme of Gambling

SING ALONG WITH THE MOVIE

Disney Movies Anywhere (DMA) is an engaging and family-friendly cloud-based digital movie service that makes it simple to buy your favorite Disney, Pixar, Marvel and Star Wars movies once and watch them anywhere.  With DMA you can explore Disney’s library of over 450 eligible digital movies, discover hours of new and exclusive short-form content, and watch your digital movies from the comfort of the living room or across multiple mobile devices.   You can add the free DMA app to a multitude of devices including iPhone, iPad, iPod Touch, Android mobile phones and tablets, Android TV, Amazon’s Fire tablets, Fire TV and Fire TV Stick, Roku, and Xbox 360. Then, connect your DMA account with participating providers including iTunes, Amazon Video, VUDU, Google Play, and Microsoft Movies & TV and your eligible movies will be shared across all your connected platforms.  In addition, you can redeem Digital Copy codes found in Disney, Pixar and Marvel Blu-rays and DVDs, as well as earn Disney Movie Rewards points with every digital purchase.

For over 90 years, The Walt Disney Studios has been the foundation on which The Walt Disney Company was built. Today, the Studio brings quality movies, music and stage plays to consumers throughout the world. Feature films are released under the following banners: Disney, including Walt Disney Animation Studios and Pixar Animation Studios; Disneynature; Marvel Studios; Lucasfilm; and Touchstone Pictures.  The Disney Music Group encompasses the Walt Disney Records and Hollywood Records labels, as well as Disney Music Publishing. The Disney Theatrical Group produces and licenses live events, including Disney on Broadway, Disney On Ice and Disney Live!.

Before You Consider Weight Loss Surgery – What You Need To Know

SING Your Way to the Olympics – Watch the TV Spot