At the Water’s Edge by S. McPerson Excerpt

Wearing the right kind of apparel for different situations boosts confidence. Catching a glimpse of yourself in a well-made suit helps settle even the worst pre-interview or presentation-related butterflies. Psychology researchers Hajo Adam and Adam S. Galinsky coined the term “enclothed cognition,” in the Journal of Experimental Social Psychology. The concept explains how people are as influenced by the clothing they wear as those who view them in a suit, lab coat or uniform. Wearing these clothes creates a physical sensation that boosts confidence in their work.

If this concept works for adults, why wouldn’t it work for children, too? 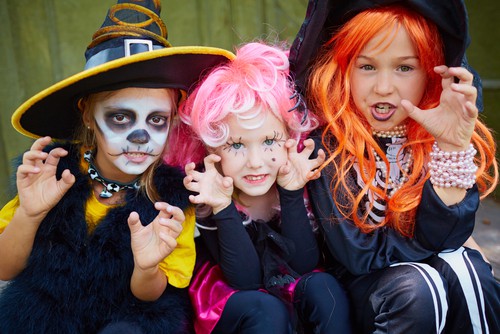 Children often enjoy dressing up in their parents’ or older siblings’ clothing and imitating them. This kind of activity boosts creativity and imagination. Even for kids who are shy, costumes can help them overcome inhibitions and gain confidence. Writing for Grandparents.com, Melissa Bernstein, co-founder and co-CEO of the educational toy design firm Melissa & Doug, says costumes shouldn’t be relegated to the closet on November 1. Instead, children should be encouraged to wear them all year long because it promotes role-playing, which is important for early childhood development. It also helps children let go of inhibitions. For example, pretending to be brave might enable a shy kid to speak up at preschool. When children pretend to be brave, they actually experience it.

Parents can give their children a costume of their favorite superhero or cartoon character for a birthday gift, even if their birthday isn’t in October, to help overcome shyness. Parents shouldn’t limit costume-wearing to Halloween if it boosts the child’s ability to interact or feel more assertive. “Modern Family” fans will remember Lily wore a princess costume to her fathers’ wedding. She not only looked adorable in it, it perfectly complemented her flower girl duties.

Superheroes often come from difficult backgrounds, Merlene Davis writes in a Kentucky.com article about a superhero run fundraiser for children who need specialized foster care services. Many superheroes were orphaned, but lucky enough to have loving caregivers. Batman was an orphan raised by a butler and later took in the orphaned Robin. Spiderman lived with an elderly aunt and uncle. Superman, adopted as an infant, relied on his parents to help him adapt to Earth. Disabled kids, even those living in the best circumstances, know they have a lot to overcome. And like any other kids, they find ways to identify with superheroes and other fictional characters. They often show this in what they wear, their favorite toys and role-play.

Likewise, many people with autism are highly sensitive to clothing and respond well to deep touch pressure. This was publicized by Temple Grandin, a veterinary specialist with autism, when she wrote about deep pressure stimulation and the “squeeze machine” she built at age 18 to cope with anxiety and panic attacks. For children with autism, bodysuit costumes like Morphsuits have had similar calming effects, according to parent testimonials reported on The Digital Newsroom. One parent says, “[My daughter] must have been extremely comfortable in it because she didn’t want to take it off.” And according to Tim Trodd, a family practitioner who works with patients with autism, the suits calm children in a similar way to swaddling babies.

It’s time to take another look at costumes. Let kids be superheroes, royalty, pirates or daredevils all year long.

At the Water’s Edge by S. McPerson Excerpt