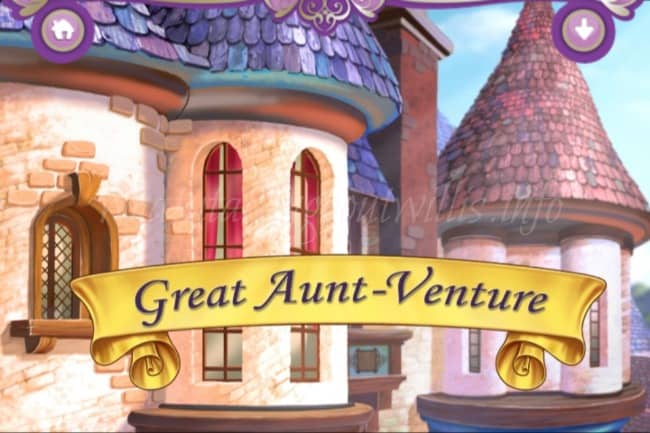 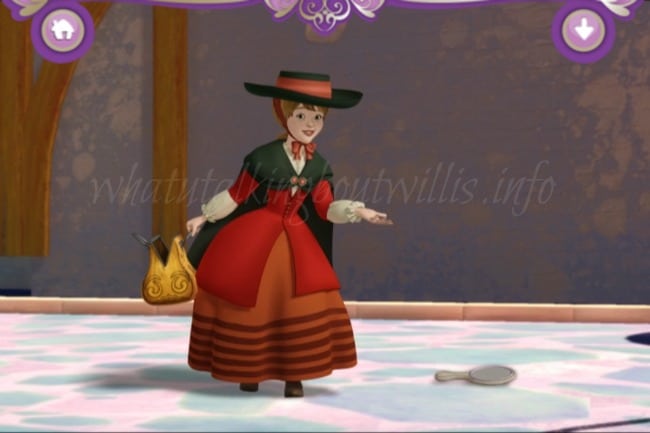 When Disney Jr. asked if I would be interested in reviewing an appisode of  “Sofia the First: Great Aunt-venture”, I didn’t hesitate to say “YES”.  You see, I have a 3 year old granddaughter (have I mentioned that before?). She loves Disney Jr., it like mesmerizes her. When I offered her to watch it, she was so excited. We sat together and she enjoyed the interactive parts, as well as the story. Her favorite word in the whole appisode was “Wizz-bang”. She got a really big  kick out of that word, and still uses it when she gets excited.

I was very impressed with not only the story and interaction but the graphics as well.  The Disney Junior Appisode app is free to download from your App Store on your iPhone or iPad. The cost for the Sofia the First Aunt-Venture is $4.99 plus tax.  I would truly recommend this app to you if you have a Sofia the First fan in your household. 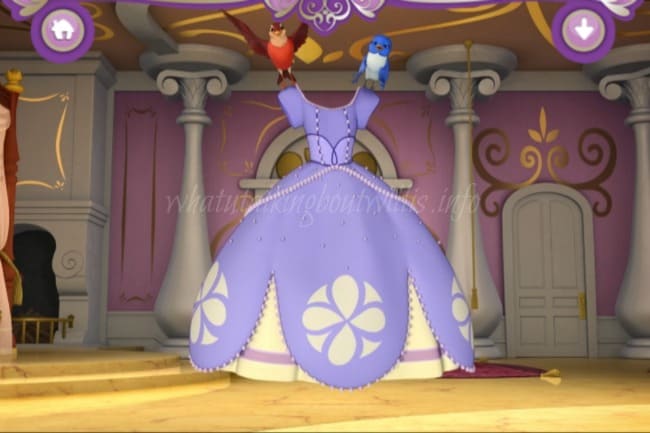 The pictures in this post are ones I took while on the app on my iPhone. I thought it would be great to share some of the scenes  to show the clarity of the app. There are also no advertisements, which I have found is very important when allowing a young child to play a game on your iPhone or iPad. 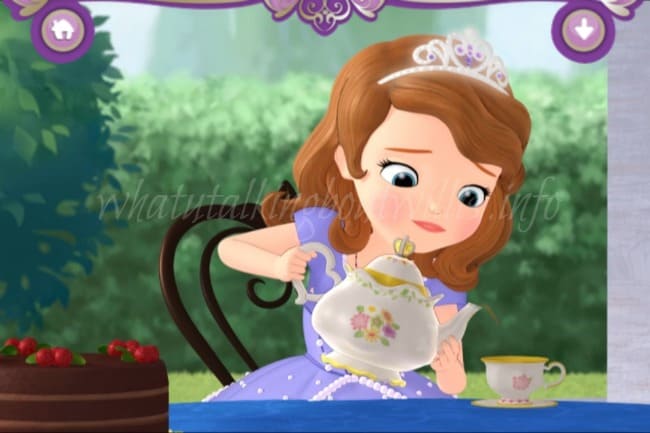 Wanted to share the news that the second season of Disney Junior’s hit animated series “Sofia the First” will debut Friday, March 7.  The new season is filled with lots of fun celebrity guest stars and appearances by Disney Princesses Snow White, Mulan, Tiana and Rapunzel.  Below is the official press release on the announcement including info on the special episode featuring “the fairest of them all,” Snow White premiering Friday, April 4! 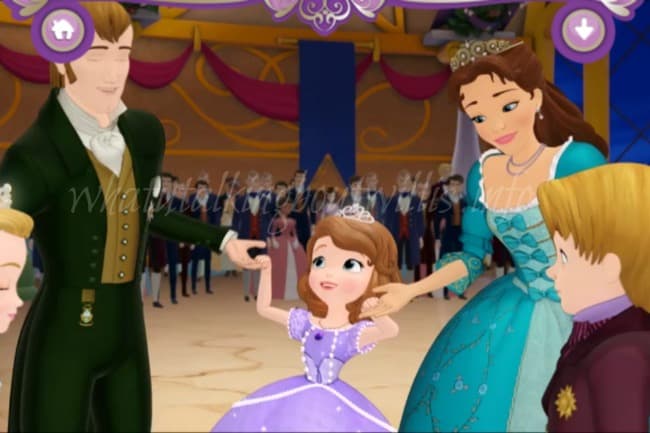 Also I wanted to let you know that the second Sofia the First “appisode” is now available on the Disney Junior Appisodes  app for iPad, iPhone, and iPod touch.  In “The Great Aunt-Venture,” Sofia reluctantly agrees to help her Aunt Tilly (voiced by Bonnie Hunt) bake a pie, but this is no dull day in the kitchen.  In search of the perfect apples, Sofia and Aunt Tilly end up on a journey full of unexpected obstacles that kids can help Sofia navigate.  The Disney Junior Appisodes app offers true interactive viewing for young fans to touch, tap, swipe, tilt, shake and talk their way through various fun-filled activities embedded into full episodes of some of their favorite Disney Junior shows.

The new season includes appearances by Disney Princesses Mulan (voiced by Ming-Na Wen), Tiana (voiced by Disney Legend Anika Noni Rose) and Rapunzel (voiced by Mandy Moore). The guest voice cast for season two includes Alyson Hannigan (“How I Met Your Mother”) as a young faun who always felt she wasn’t special enough; Ginnifer Goodwin (“Once Upon A Time”) as the castle’s kitchen maid who aspires to be an inventor; Melissa Rauch (“The Big Bang Theory”) as Ruby’s fairy godmother; Anna Camp and John Michael Higgins (both of “Pitch Perfect”) as a charmingly sinister princess and a tall fire-breathing dragon; Isla Fisher (“The Great Gatsby”) and Sean Astin (“Lord of the Rings”) as two adventurous young sprites; Nick Offerman (“Parks and Recreation”) as a well-connected fox who reigns over Enchancia’s woodland creatures; Robert Morse (“Mad Men”) as an elderly retired sorcerer; Christian Borle (“Smash”) as an ambitious, young castle steward out to take Baileywick’s job; Oliver Platt (“The West Wing”) as a sickly old dragon; Tracey Ullman (“The Tracey Ullman Show”) as a happily wicked witch; and Phylicia Rashad (“The Cosby Show”) as a cranky ice witch who eventually allows her heart to be melted by the power of music.

Created for kids 2-7 and their parents/caregivers, “Sofia the First” tells the story of an ordinary girl who becomes a princess and, throughout her journey, learns that possessing the characteristics of a true princess – honesty, loyalty, compassion and grace – is what makes one truly royal. The series stars the voices of Ariel Winter as Sofia, Sara Ramirez as Queen Miranda, Wayne Brady as Clover, Tim Gunn as Baileywick, Darcy Rose Byrnes as Amber, Zach Callison and Tyler Merna as James, Travis Willingham as King Roland II, and Jess Harnell as Cedric. Recurring guest stars include Eric Stonestreet, Ellie Kemper, Viola Davis and Bonnie Hunt.

In the season two premiere episode, “Two Princesses and a Baby,” Amber asks royal sorcerer Cedric to cast a magic spell that will give her and twin James separate birthdays so that she can celebrate the day all by herself. After the spell accidentally turns James into a baby, Sofia helps Amber realize how special it is to have a twin, and then they work together to help Cedric reverse his spell. The episode features the songs “Sisters and Brothers” performed by Sofia and “Two By Two” performed by Amber.

Then, in “The Enchanted Feast,” Snow White appears to help Sofia learn the importance of trusting one’s instincts after she suspects that a visiting sorceress is not who she says she is. Snow White is voiced by Katie Von Till and Megan Mullally (“Will and Grace”) recurs in the episode as Miss Nettle, an evil fairy who disguises herself as a powerful sorceress to attempt to steal Sofia’s magical amulet.

“Sofia the First” is executive-produced by Craig Gerber (“Pixie Hollow Games”) and Jamie Mitchell (“Special Agent Oso”), who also serve as story editor and director, respectively. John Kavanaugh (“Winnie the Pooh: Springtime with Roo”) serves as songwriter/music director and Kevin Kliesch (“Tangled Ever After”) is the composer. “Sofia the First” is a production of Disney Television Animation.

Disney Junior reflects the emotional connection generations of consumers have to Disney storytelling and Disney characters, both classic and contemporary. It invites mom and dad to join their child in the Disney experience of magical, musical and heartfelt stories and characters, while incorporating specific learning and development themes designed for kids age 2-7. Disney Junior’s series blend Disney’s unparalleled storytelling and characters kids love deeply with learning, including early math, language skills, healthy eating and lifestyles, and social skills. In the U.S., Disney Junior is a daily programming block on Disney Channel and a 24-hour channel.  There are 33 Disney Junior channels in 24 languages around the world.